I didn’t want to get out of bed. I didn’t want to see the light. It felt as if the bright, skin burning sun would obliterate me today. My mood had fallen below the usual ‘meh’ and had dipped into a deep blue funk. On a scale of 1 to 10, the needle was sitting on extreme poop-like, which was odd, considering the scale was numerical. I just wanted to lie on the floor with the lights off, listening to nothing but the static noise on the TV I had sold weeks ago.

But I had to endure. It’s what one must do isn’t it? Am I not forced to integrate into this world regardless of the poop-like stature my mind expelled? Luckily I can force myself to do what it is that I don’t want to do. Heh, luckily…

If I was to do this I was going to need an outfit that segregated me from the norm. Something that made me feel alone yet at the same time recognised by the masses. I went through my drawers and organised everything I had. I separated the so called wheat from the chaff, or more appropriately, shit from the crap. I had about 30 things I no longer needed or wanted. A pile of junk to sell to the pink llama thing at Re-Tail.

Finally I put together an ensemble (pronounced the French way with emphasis on the bleh at the end.) I had a gas mask that would hide my face from the judging eyes of the many. I had an armor top that looked like a straight jacket and some dark pants to round off the look. I drew the power from deep within myself and stepped outside. 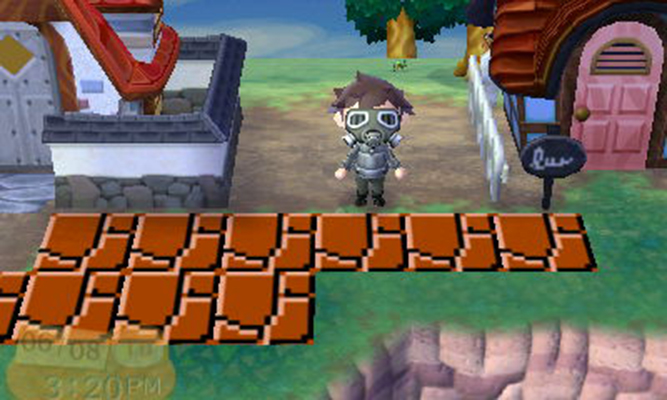 As I started to leave my house I recalled the conversation I had with Thomas J Nook. I assume that Tom was short for Thomas and not something like Tomatha. I also made up the middle initial. As enforced by signed contract, he should have built my basement overnight. How fitting. A dark damp place in the bowels of my home to match the dark damp place within the bowels of my gut. I went back inside and went down the stairs. 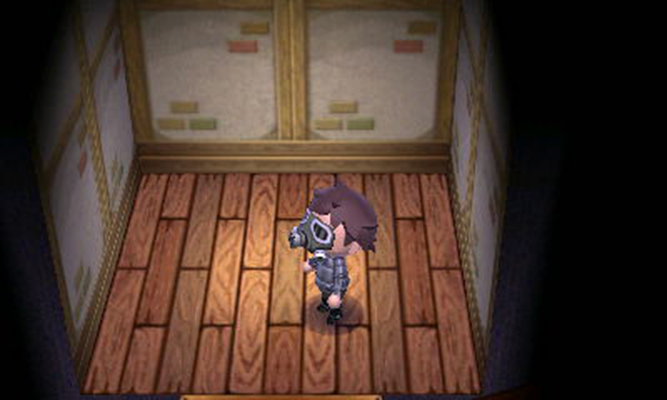 It appealed to me. It would be a fitting lair.

I took the pile of crap that I no longer wanted up to Re-Tail. I didn’t need the money from these goods. I just wanted them gone. I ended up making around $50,000. As they say, money can’t buy happiness. I left the shop and heard a loud grunting noise coming from behind the building. Having very little of a care factor I continued to walk away. Suddenly the grunting turned to screaming. I let out a highly audible sigh and turned around. It was the traveling camel merchant Sahara.

I approached the camel and told it to shut up. It asked me why it would do that when it worked to get my attention. I turned to walk away and the camel grabbed me by the sleeve. It begged me to purchase some wallpaper and carpet. It had been weeks since it had made a sale to anyone in Meowland. SIGH. I said that I would. Who knows. Maybe it would be something that I… liked.

We went back to my house and the camel did it’s work. Moments later it reemerged from out my door.

I went inside to take a look. Really I didn’t care what it looked like. Right now I felt nothing towards my surroundings. The carpet was more or less the same as before and the wallpaper was designed to make the interior look like an exterior. It was as if the place was inside out.

I remembered how yesterday Boone told me he was leaving his male life behind and fully committing to becoming She-Boone. I wondered if he was selling his house. I walked over to find out. As I made my way there I noticed my fruit orchard across the river. It was blooming with the genitalia of the trees. 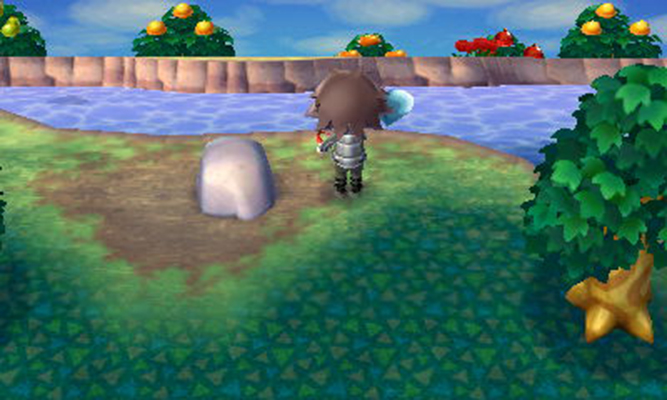 I walked into Boone’s house and saw that he was packing all of his belongings. He told me that he was going to ceremoniously burn them. It sounded fitting. Washing away your past in a blaze of fire, with a new life rising from the ashes. I asked if he was selling his house. He confirmed that it was in fact getting demolished. Excellent. Now if Goaty Creature leaves I will have my solitude again.

As I left he said something that struck a nerve. “linked by muscle telepathy…” What the freak did that mean. I didn’t want to know.

Being that the Museum project was completed yesterday, I decided to check out the additions to the building. I walked in and ignored the sleeping Blathers and went straight up stairs. There was another owl up there, also asleep. Freaking nocturns. I loudly cleared my throat in effort to wake the owl. 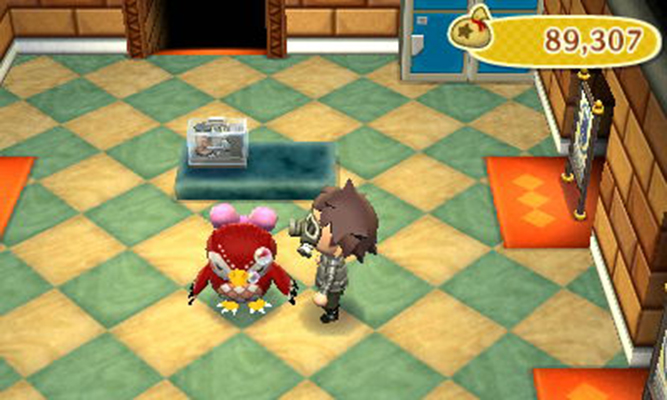 It woke with a startled look on it’s face. It seemed excited to see me. I guess I appeared apathetic. It probably told me it’s name but I didn’t bother taking note. It explained what I already knew, which was that residents could set up their own displays in the show rooms for a fee of $10,000. I faked interest and left.

I needed a haircut that suited my mood. I went up to the hairdressers and answered the pointless personality questions. I knew what I had to say to get the look I wanted.

I couldn’t help but feel Rammsteinish.

I figured I should harvest my fruit before any of the other townsfolk steal it. I shook the trees and the fruit fell to the ground. As I watched, it was as if they fell in slow motion, gracefully coming closer to the earth with what appeared to be imminent destruction. The fruit would bounce every time though. As I collected them one of the apples was rotten. Lovely. I sat and watched as the bugs surrounded it and began to eat the flesh, which was no longer it’s usual plump crispiness but a soft, almost smoosh inside.

The tree from which the apple fell also lost all of its leaves. I assume it was spent. I cut it down and disposed if the stump.

As I heard the bugs munching on the apple I had a brilliant idea. This apple was the perfect symbol for life. Constantly rotting towards imminent destruction. I took the apple to the museum. I was going to put it on display. 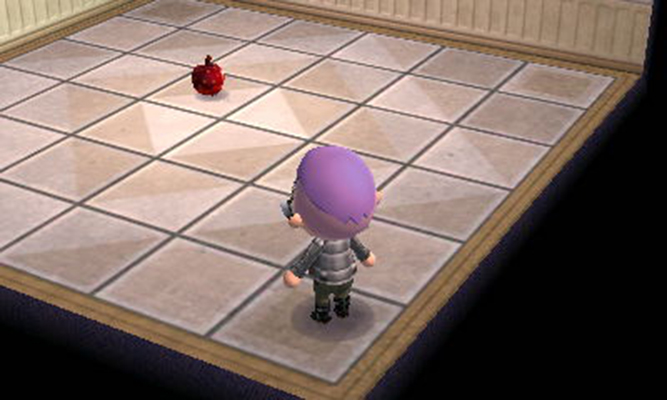 I named the exhibit and gave it a fitting poster.

As I headed home I wished there was another bridge near my fruit trees. It would make things easier. Then I remembered that I’m mayor! I went to town hall to start a new public works project. I would get my bridge!

I sat at my desk and my assistant congratulated me on the completion of the museum expansion. She said that a ceremony was to take place and asked if I wanted to go.

I declined. I did not want to see people. I enforced the new bridge construction and left.

I recalled that over the last few days I had found some lost items amongst town. I had no interest in being an errand boy, running from villager to villager looking for the rightful owners. I went to the notice board and said what was what.

Home was calling. I wanted to collapse into nothingness and to be by myself, doing jack all. But no. People always want something from me. First it was Fauna. She just kept on talking and talking and talking. I wasn’t listening to a thing she said. 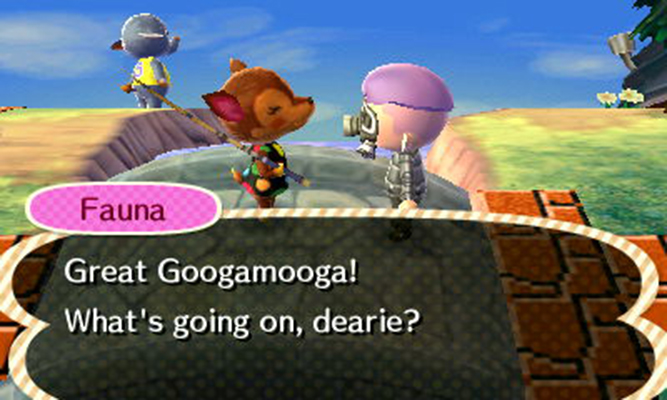 Goaty Creature wanted to gossip to me about what the townsfolk were saying about me. Frankly I didn’t care.

What the hell is it other people’s business that I save money? Freakin’ none, that’s what. Dizzy was next. I hate him. So much. At least the feeling was mutual.

I don’t think he understands hate though. He still wanted to converse with me. What a fool. Foolish fool.

I went to see Fang to make sure he was still feeling better. Even though I cared nothing for myself I still cared for my friend. He was feeling great and was much appreciative. So much in fact he gave me a gift.

I was glad he was well but I didn’t care for presents. I put it in my pocket without opening it and said my farewells for the day.

Man I hate Dizzy. I did the collapsing onto my floor that I had wanted to do all day. My mind began to wander. I started to get ideas. Ideas about things I shouldn’t do. I thought about my axe… I thought about Dizzy…