As I lay in my bed falling asleep I felt the worries of the day dispersing from my mind. Things like Blathers complaining about the museum, the Trap Setting Son of a Bitch and that idiot Dizzy were further away then they had ever been. Relaxation flowed over my particularly sexy body. I felt little tingles running up my arm. Tiny signals that my nerve endings were sending to me to relax me even more. I looked down at my arm. Holy crap! There was a spider on me!

I promptly evacuated my bed and began to scream like a little girl. I flicked the arachnid onto the floor and preceded to smoosh it with the closest thing to me… My asteroid. Great. Now it has spider guts on it.

I heard a boom like noise happening outside. I looked out my window and saw very little. I went out the door. Immediately Mr. Resetti forced his way from beneath the footpath in front of my house. He looked angry. I acknowledged him with a casual ‘sup. Though he had the demeanor of a grumpy house cat that dislikes everything, what he spoke about was anything but. He thanked me for finally getting enough revenue raised to complete the Reset Centre, or as I like to call it, The Mr Resetti Institute for the Saving Impaired or MRIFTSI for short. It wasn’t the greatest acronym ever but I only used it in private.

As the conversing with Mr Resetti came to a close, and in fact during the whole thing, I could still hear the boom-like noises. I suspected our fair town of Meowland was under attack. What was this? We had no enemies! Well, not yet anyway. Why had I not raised an army? Probably because the townsfolk are mostly cute and cuddly little animals. Well except for Dizzy. He’s an idiot. And I guess the two goats are rather ugly. And there’s Boone the cross dressing monkey. And Fang looks more vicious than cuddly. Not to mention Princess Leia is starting to look her age… The elephant aint no looker either.

I guess the two deers are kinda cute.

I looked skywards and saw a rain of fire. LOL! (I actually said lol out loud.) Twas merely fireworks.

They were pretty cool fireworks too! My assistant even took the liberty of adding some of the town’s custom designs to the explosive display. There was the Mario Bros. shirt design, the old flag design that warned what would happen to trap setters and the ever classic Heavy Fist. 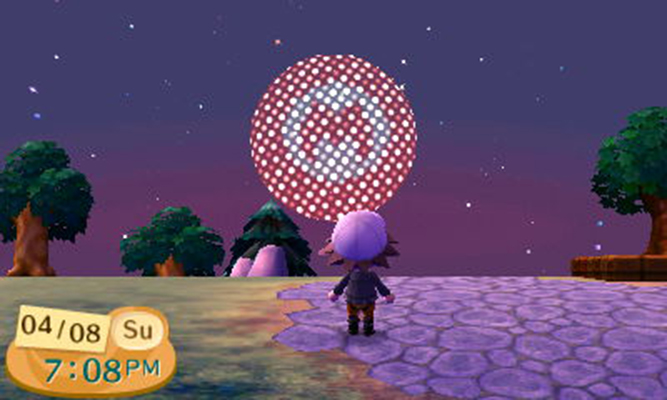 I went and saw my elusively names assistant in the town square to congratulate her on a job well done with this sulfur smelling display of light. She blushed with giddy joy. It wasn’t often I threw her a great verbal appraisal. Mainly because she did nothing to deserve it. She went ahead and gave me a gift to commemorate the first fireworks of August. 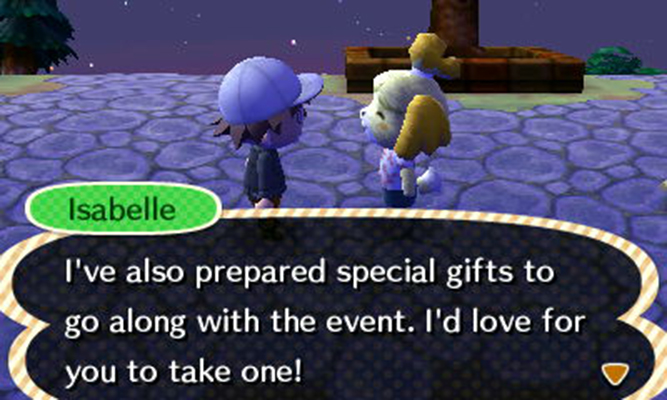 Also in the town square was the sneaky art dealing fox Redd, only he wasn’t selling art. He was selling… COOKIES! Hot damn I love me some cookies. I bought one and decided to save it for later. 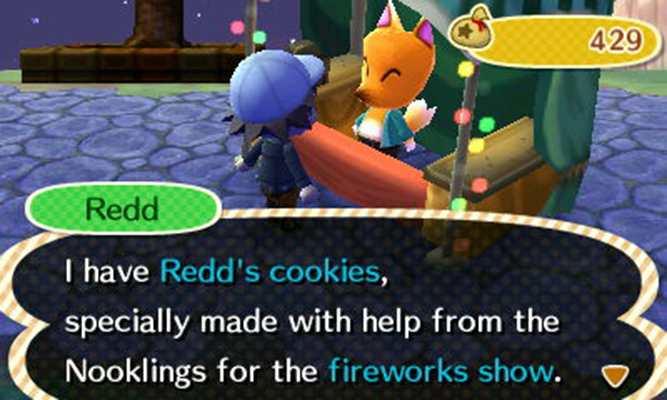 I went to find my good friend Fang. I searched high and low for my furry wolf pal. He wasn’t around town or in the village. Where was he? I went to the most logical place – his house. I knocked twice on the door and entered. He didn’t look good. Poor guy was still sick. I felt really bad for him, missing out on the fireworks.

I raced to Super T&T, blasted in through the doors and demanded medication from Timmy, the night shift raccoon. I handed over the four hungie and headed back to give fang the glorious, illness eradicating medicine.

Even though it tasted like crap, Fang was grateful and said he was feeling a bit better. I left him to get better, and to hopefully avoid any contagions.

I was hungry so I began the digestion process on my cookie. It was rather meh tasting. Good enough though. I read the ticket that was inside and took it back to Redd. It looked like it was a winner and he confirmed this fact. He presented me with a sparkler. I lit it on fire and watched it fizzle in a gloriously underwhelming display of pyrotechnics. 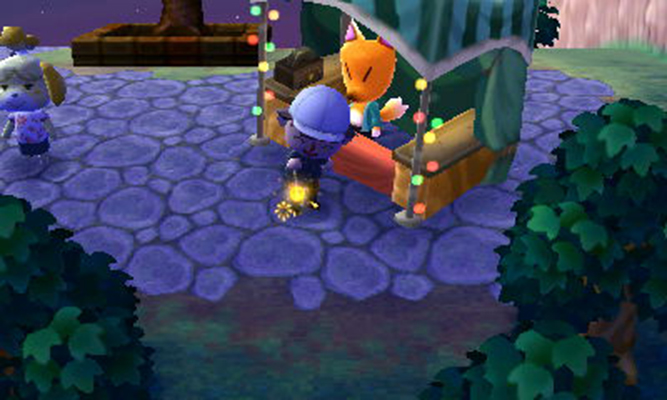 As it took it’s last fizzly breath a mosquito bit me! What a little bastard.

And with that I went back home to bed.

I awoke many hours later, when the sun had risen and the date had ticked over to tomorrow. First things first, it was new look time! I went to the accessories shop and they had a fish bowl for sale. I wanted it! I wanted to catch a fish to display in it. I went to hand over my monies and the shop keeper told me to enjoy my astronaut helmet. Oh, yeah. That’s what it was. Not a fish bowl.

I put it on my head and went to the Able Sister’s. They had some armor pants that matched an armor shirt I already had. It looked like some kind of space suit. It rocked!

It did make it look like I had a bob haircut though.

As I did my usual rounds through town, Boone came up to me. He said he had… News. With the pause and all. He said that I would no longer see him around town. He had decided to go all the way… He was going to permanently become She-Boone. I didn’t dare ask if he was getting the chop. Frankly I didn’t want to know.

I went to the Town Square to see what was goin’ down today. Walking around my orchard was The fat old scout master looking guy. He wanted to give me a badge. Creepy, but I took it. It was to commemorate my awesome turnip trading skills. 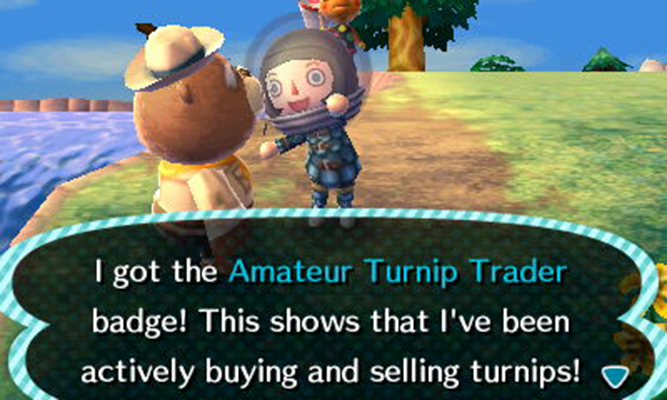 Redd also had returned, but this time with his art stall. I went in and carefully viewed the four pieces on display. If history was anything to go by, this sneaky bastard had only one legit painting and the others were forgeries. I chose the one with fruit. It looked legit to me. 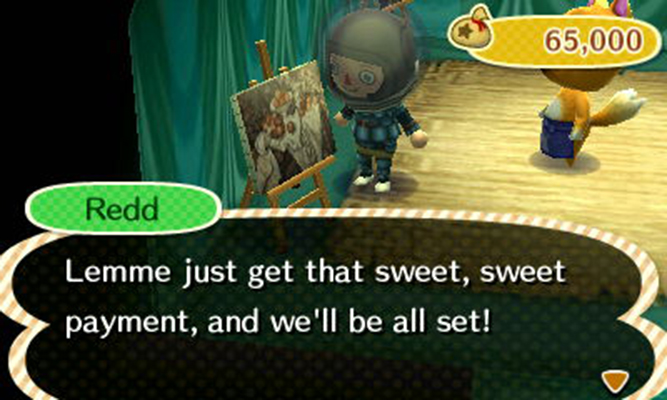 I headed over to The Nookling store. OH. EM. GEE! FORTUNE COOKIES WERE BACK!!! I was lied to yesterday, but boy, I’m glad I was. Tommy told me that due to demand the cookies would occasionally appear throughout the month, unlike originally planned. I purchased one and left.

I went to see Lord Nook. Even though I had payed off my last loan, obviously I wanted more. He knew this too. He’s like a freakin’ crack dealer. He gives you a taste to get you hooked and then he rapes your wallet. I asked for a new basement.

Feeling a little bored, I headed to the Dream Suite to go on a sleepy adventure. The weird creature that runs the place asked me where I wanted to go. I screamed for Japan. I lay down in the bed and drifted off.

I awoke in a snowy land. There was a fat walrus here too. I went up to speak to him and he sounded hungry.

Even though it was winter here, it wasn’t Christmas. It wasn’t even December. There were light on most of the trees though. Japan is weird.

As I wandered around I found a blue balloon. It was awesome! I love me some balloon action. Hehe, it just follows you around where ever you go. 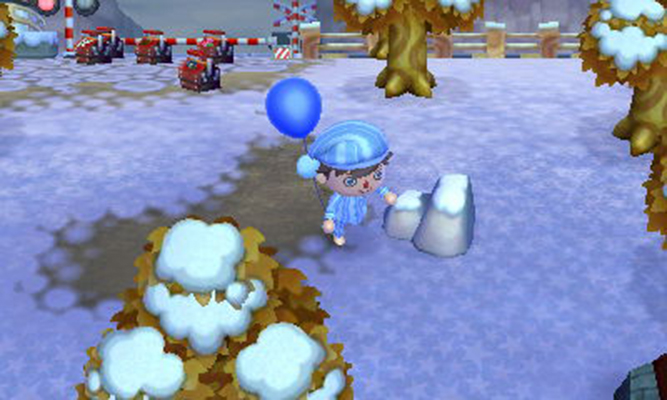 As I explored I came across a Pirate! I introduced my self and he said something unintelligible. Well it was in Japanese I assume, so I haven’t a clue what he said.

I went into the Pirate’s house, possibly without his permission. I wouldn’t know. I had no idea what he was saying. I went through his things, admiring a lot of the furniture. I went down to the basement and saw a chest against the back wall. Could there be treasure inside? I took a look.

It wasn’t treasure. I’m just gonna leave it there.

The time had come to head back home. I awoke in Meowland and went to Town Hall to do some work. Seeming that the Reset Centre was complete, I figure I should do as promised to Blathers and set the public works project for the expansion of the museum.

I went to check on Fang to see how he was doing. Hopefully the medication was working. On the stone bridge I bumped into Princess Leia. She saw my shovel and questioned me about it. She said she was looking for the Trap Setting Son of a Bitch. I told her that I use it to dig up fossils and also the buried pit traps to save villagers from falling into them.

She told me that she believed my story and I went on my way. Fauna stopped me too. She asked me to give an item to Boone, that he left at her house. HA! soon there will be no Boone! I decided to keep the item and will look at what it is tomorrow. I didn’t tell her this.

As I reached Fang’s front door I head someone calling for me. It was The Elephant. He was on the beach below. I went down to see what he wanted. 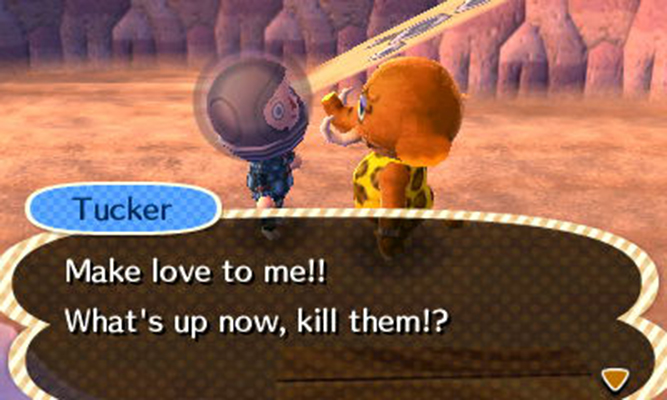 Sometimes that guy makes no sense.

I went to Fang and asked how he was.

Hoorah! My buddy was feeling better! Yaaaaaaaaaaaay! I was happy that he was no longer sick. At least next weekend he will get to see the fireworks. And we can play outside and watch movies and stuff.

Unless he gets hit by a train or something.