It was early morning and I was wide awake. I had been for some time. It was still dark out but I didn’t really want to go out there. I knew that if I did, then the residents would want to talk to me and I just didn’t have the patients for some of their stupidity right now. I mulled around my house and finally gave in.

As I made my way through the village I noticed a new resident had moved in. In the fashion of Link, I barged in, hoping there were some pots to smash.There wasn’t. There was just a goat. 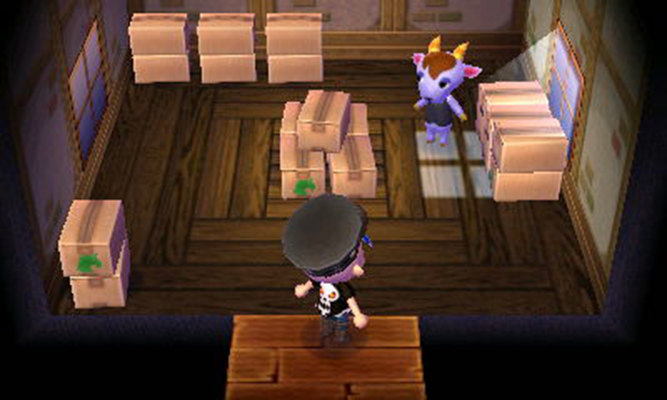 Great. Another goat… At least this one looked a little more intelligent than Goaty Creature. He wasn’t gnawing on a cardboard box, which was a good start. I approached him and introduced myself. He said his name was Kidd. He spoke English, which meant he was already a million times better than the other goat in Meowland. He told me how he had just moved here based on some advice he was given by a stranger on a train. 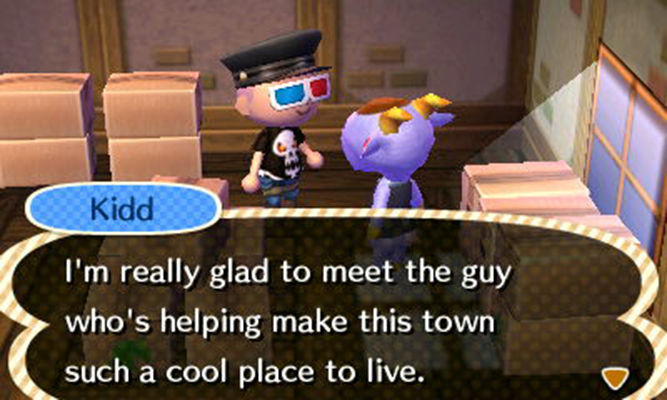 Kidd sure knows how to make a guy feel special. Hopefully he will be a good addition to our town. I mentioned how his parents mustn’t have been very imaginative when naming him Kidd. I noted how it was about as original as someone calling their pet cat ‘Kitty’. He laughed and told me that he was actually named after NBA All-Star Jason Kidd. I felt a little embarrassed and excused myself from his house.

I made my way up to town and bumped into Fang. He was fishing. He told me that there was nothing better than being out in the crisp morning air trying to kill some fish. 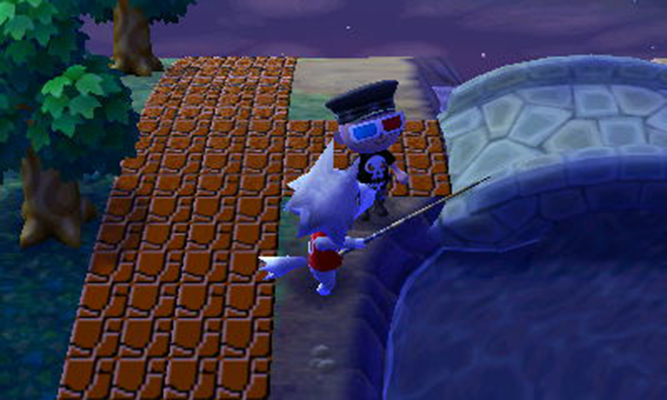 To my surprise Nook’s Housing was open. I went in and asked him how much coin I was going to have to pay him for the recent addition of the second story to my house. That smug bastardish look fell over his face, just like it does every time money is discussed. I think he found it hard to not giggle to himself when he said the figure.

I left the paperwork where it was and went to check on the current Public Works Development. I spoke to the Gyroid to see how much had been donated. It was only a few thousand dollars. What is with these people! It’s as if they don’t want this town to grow. On the edge of the cliff I notices a soft patch of dirt. I went and dug it up. To my surprise it was a pit trap. It was very odd… Quite a weird place to put a trap. What was the trap setting son of a bitch thinking?

I went back home. The sun was coming up. The blue flashing flag was up on my mailbox, indicating that I had a letter. I ripped it open.

It was a letter from myself. I had totally forgotten I even wrote this. I had sent it on the day I moved to Meowland and was made mayor against my will. That was a month ago. I was right. I was kicking ass.

I went back to see if Fang was still fishing. He had stopped, but was still near the lake. He looked at me and said that he was thinking about leaving Meowland for good. I told him that he couldn’t. I would not let him. 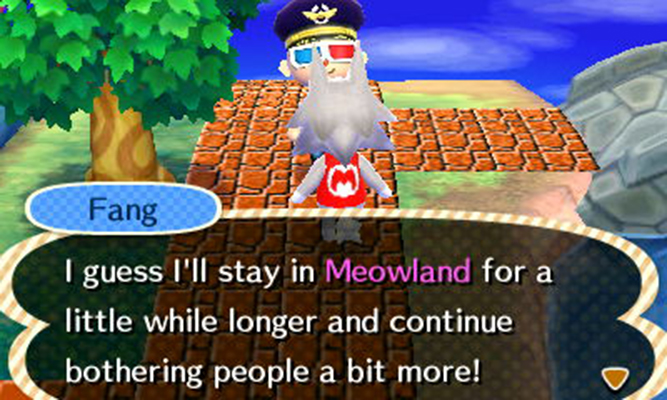 Thank the lord baby papagenu he agreed to stay. I will never find the trap setting son of a bitch without him.

For the last few days I have spent some time building a footpath between the animals homes. I’m using the Mario Brother pattern that I created some time ago. This is in effort to make Meowland look as nice a possible. Lord knows the animals wont do anything about it.

It was time to get my hair fixed. Enough time had passed as not to cause offense to Harriet, the hairdresser poodle. I answered her questions and she input the answers into the machine. After a few moments my new look was revealed. I was pretty horrified. I looked like Satoru Iwata… 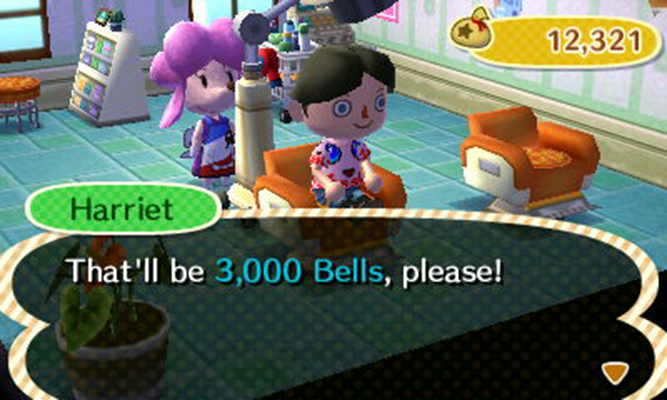 I put on a mustache I recently purchased, to see if it would help any. It did. Only by the fact that it takes away focus from the top of my head. 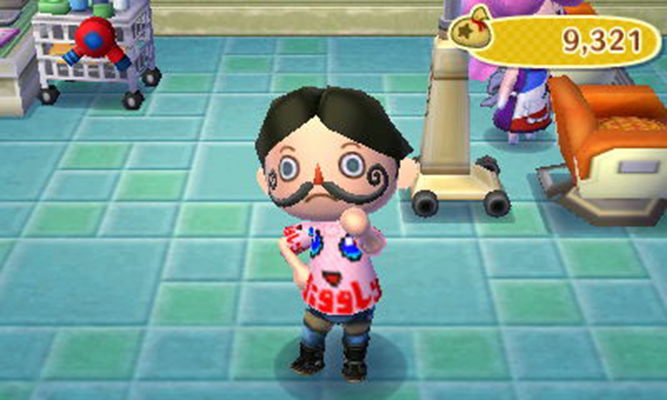 Next I headed to the Dream Suite, a recently completed public works development. For some reason there were Christmas trees out the front.

I went in and spoke to the proprietor. She explained that I was able to use the facilities to fall asleep and visit dream towns. It sounded interesting. I decided to give it a go.

I don’t understand why so many of the town’s shop folk are so creepy. I lay down on the bed and Luna the dream lady used some kind of hypnosis on me. 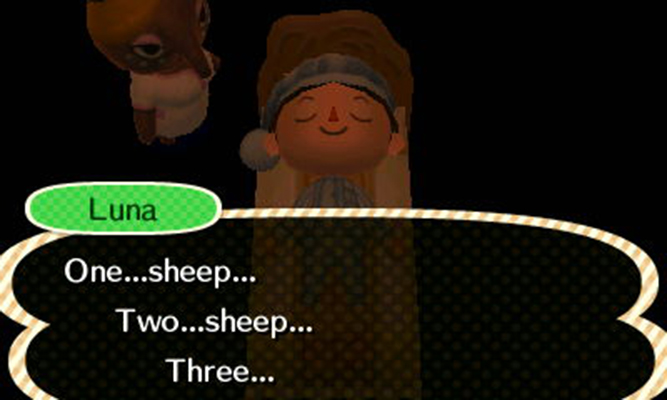 I awoke in a strange land. I was in the middle of the town square.

I walked over to the town notice board to see where I was. 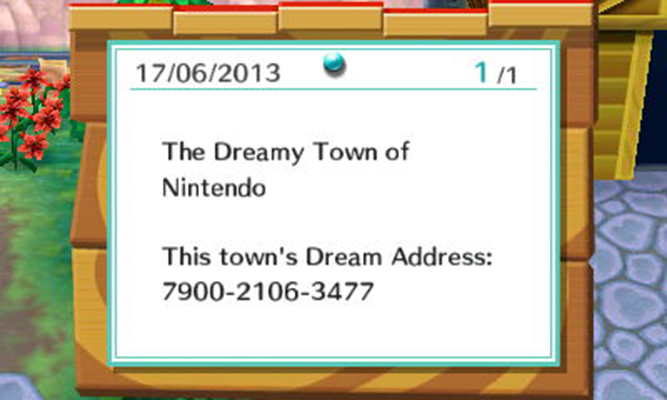 I was in Nintendo Land! How awesome was this! I was pretty excited. I ran around and looked at some of the sites. For some reason there was a picture of Tom Nook. Man I hate that guy.

I went to the local Re-tail to see if there was anything interesting to buy. There was an odd note on the door.

There was a museum in town with some interesting stuff to see. I had some of this stuff in my own house. I felt pretty good about that. In the basement was a shrine to the legendary hero. I payed my respects.

I did some more sight seeing and noticed the foot path was similar to my own. Overall it is a very pretty place that I one day envision Meowland to look like.

I was sad that I didn’t see any Goombas and went back to town hall to wake up.

Hopefully with the help of the townsfolk I can get Meowland looking as good as Nintendo Land. But I have too much to worry about right now. Especially that trap setting son of a bitch…

One thought on “Animal Crossing Diary – A Month Has Past”