Today is a day of action. Today is a day of discovery. Today I shall go in search of the trap setting son of a bitch. I got out of bed all decisive like, ready to do some investigating and grilling of the townsfolk. Then I looked in the mirror… Oh god, I hate this haircut. Maybe I’ll go to the hairdressers first to get this fixed.

I ran as fast as I could to make sure no one wold see my shame. I climbed the stairs to the hairdressers and sat in the chair, ready to get my head looking a little more respectable. 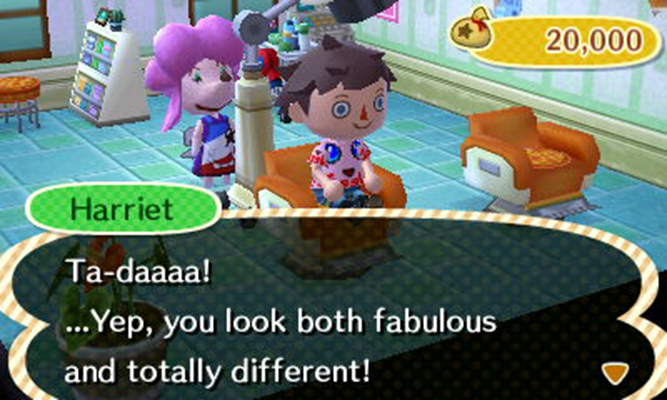 Eh, not too bad. I can live with that. After getting my hair cut my clothes were all itchy from the small bits of hair. I bought some new threads.

First stop was Meowland’s own loan shark, Tom Nook. I asked him what he knew about the traps around town. He told me how this had only started happening in Meowland since I had arrived. It was bad for his business. Potential home buyers where scared that their houses would be built on a plot of land filled with sink holes and pit traps.

Yes, Tom Nook is an asshole. But he cares too much about money to be guilty.

Moving on. I went to see Blathers at the museum to see what information I could get from him. Blathers is an old coot and I would be lucky to get anything from him that wasn’t related to bugs, paintings, fossils or fish. If I could get him going though, maybe, just maybe, he would have some information that I needed.

Naturally he was asleep. After all it was daytime and he is an owl. And old. Old people always sleep. I woke him up and he screamed like a little girl. When he realised where he was, he excused himself and welcomed me to the museum. He asked what he could do for me. Jokingly I said take me to a show and buy me a steak dinner. I laughed. He didn’t. I told him to never mind. I asked him if he knew anything about the traps being set around town. He looked at me all confused like. I asked if he knew what I was talking about, if he had noticed the soft patches of dirt around the place.

A look of wonderment fell upon his face and his beak made a smile like shape, if that’s even possible. He asked if I too was a fossil enthusiast. I reminded him that I had donated over 30 fossils to the museum. He seemed to not hear me. He continued on about how fossils are sometimes found in the soft patches of dirt around town. I told him that it wasn’t just fossils in that there dirt. A look of anger bestowed upon him. He started to shout about how I was right and that recently someone had been burying pit traps in place of the fossils.

Precisely what I was trying to say. He said that he was on a late night fossil hunt one night and fell into a trap. As he was trying to get out, a shadowy figure ran out from behind some nearby trees and disappeared. Hmm… Interesting. He too had seen the assailant. It confirmed what had happened to me that fateful night when I was hit over the head.

There was little chance that blathers was the trap setter.

I went to Town Hall to ask… Umm… Aww crap. I still don’t know her name. None the less I burst through the doors and enthusiastically greeted my assistant, referring to her as such. She began to say how permits were over due and that she had sooooo many upcoming events to plan. I stopped her there. I referred to her as sweet cheeks and asked if the town had any form of surveillance. Anything that could help me catch this ne’er do-gooder.

She said that the town used to have a CCTV set up all over town, but she had it disconnected right before I arrived due to budget constraints. This sounded a little suspicious. I couldn’t help but think she was hiding something. I couldn’t push too hard right now. Plus, I liked this puppy. She was a kind dog. I let it go for now and continued on.

The guilt reading was high, but I think it was because she had a secret. I don’t think she is the trap setter, but she is hiding something.

I was feeling a little hungry so I went to the Nookling’s and bought a fortune cookie. I greedily scoffed it down and feasted my eyes upon the ticket within.

What the hell was this? This was no fortune. I ran back inside the shop and ask Timmy what it meant. He looked surprised. He told me that wasn’t the message he put inside the fortune cookie. He had never seen that fortune before.

It was a threat. It had to be a message from the trap setting son of a bitch.

I took Fang’s advice and went home. As I walked in I saw a piece of paper on the ground. I picked it up. It was a letter.

Holy crap. I was trying to run away from my past. Why else was I here! Why else would I agree to becoming mayor of a town that I had only just literally stepped off the train into. I wanted a new start. But now it looks like I have to face my previous life.