I hate days like today. I feel so alone. Nothing entertains me. I’d spent half the day just sitting here in my house. Doing nothing. Sigh…

Suddenly came an uninvited knocking upon my door. Great. Who was this going to be? If I was lucky it was just the postman delivering a package. Knowing my luck it was going to be Goaty Creature… Or even Dizzy. I removed myself from the Super Toilet, which lives up to it’s name by the way, that Princess Leia gave me a while back. I dawdled over to the front door and regretted not having a peep hole.

I opened the door and standing there, grinning like an idiot, was Boone – in his male form. It could have been worse. I prefer conversing with She-Boone, but either way I didn’t want the company. He invited himself in and said something belittling to me, as usual. He isn’t at the top of my suspects list to be the one setting traps all over town anymore. He’s too stupid. He began looking at all my stuff, commenting every now and then. At least he wasn’t rubbing his grubby mitts over everything.

I sat back down on my Super Toilet to try and make Boone uncomfortable and leave. It worked.

As soon as the ‘overly masculine’ Boone had left, I decided to do the same and ventured outside. I made like a tree and got the hell out of there, as they say. I solemnly walked around the village, trying to ignore everyone in hopes that they would return the favour. Most people said hi or gave me the nod as I walked by and I returned the greeting with the simple act of raising an eyebrow. Most except for Dizzy that is. He came running up to me, sill under the assumption that we could some how manage to become friends. Yeah, how about no. He asked me to deliver a package to Fauna, the local deer.

I took the package and left. As soon as I was out of Dizzy’s sight, I opened the present. Inside was a piece of furniture that I had no interest in keeping for myself. I found Fauna and gave her the unwrapped item. She appreciated it but wished it was in present form because “It’s so fun opening presents!”. I made my way back to Dizzy and told him to consider the errand done. He asked how it went down. I told him all the details.

Did I mention that I hate Dizzy? Figuring that I had outworn my PSY look, I headed towards home to get changed. On the way, I was stopped by Winnie, The horse that dresses like a cow. I hoped that she didn’t want anything from me. She began to explain to me that she was leaving Meowland on the 14th of this month. It wasn’t really any skin off my back. Or is it hair off my teeth? Those saying always confused me. 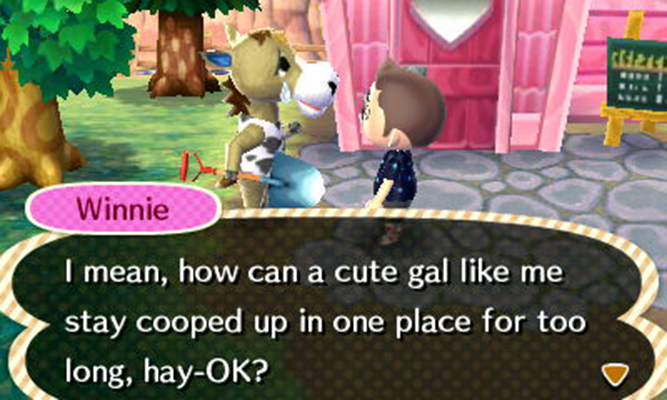 I got home and ventured into my quickly filling closet. I looked through the clothes and stuff I’d collected over the last two and a bit weeks. I kind of just threw something together. It looked good though. 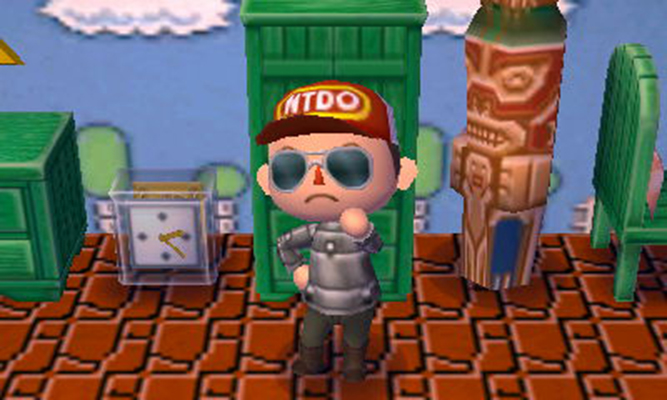 I went to my office in Town Hall and spoke to my assistant, whats-her-face. I didn’t even bother pretending to know her name today. Her attitude was too cheerful for me, but that’s how she always is. I told her that we needed to do something about Dizzy. She gave me a residents complaint form to fill in, but there wasn’t an ‘I just don’t like him’ option. I said that I hated his clothes. I guess that was true enough.

I’d never noticed before, how Asian looking she looked when she closed her eyes. Having done all that I was going to do at work today, I headed to T&T Mart. The little nookling greeted me warmly. I didn’t know if he was being sincere or if he was just trying to butter me up. I’d worked retail before so I knew the game. He did seem rather genuine though, as opposed to the big man in town Tom Nook.

She-Boone was in store. That gorilla sure can do his makeup fast. I took the two fortune cookies whilst being watched in envy by the cross-dressing monkey. She said that she wanted to buy one. I told her tough Bikkies. See what I did there? Bikkies… Fortune cookie… Biscuit? I preceded to begin the digestive process in front of her jealous eyes. I even read the fortunes aloud.

I think that ‘pretty girl’ bit hurt the most. My prizes we a Fi Mask, something that I already had and a pair of Varia Suit Pants. They were new and look untrendy enough to be cool. Not in a hipster way, but in a no-one in town has these way.

Having successfully shared my depressed mood I continued on. I walked down to the town plaza to check on my fruit tree orchard. Standing around the town tree was Fang, Fauna and Goaty Creature. Fang was excited to see me. Usually I’m the Turk to his JD, but today I just wasn’t feeling it. He said that they were about to start a game of Hide and Seek and that I was now the nominated seeker.

Such a childish game, but I wasn’t about to let Fang down. There wasn’t really anywhere to hide in this town besides behind houses and trees, so it only took me about four minute to find the animals. Even though I had won, they still enjoyed themselves. Lucky them. Having spent long enough in Meowland today, I headed over to The tropical island of the turtles.

Kapp’n, the guy who runs the boat there and back is kind of weird. He seems to only ever have one thing on his mind.

I hope he wasn’t talking about young girls…

Arriving at the island I went straight out to enjoy the solitude. I started off by pretending I was a hula girl. Don’t get me wrong. I’m not talking She-Boone style. I just thought it looked funny. 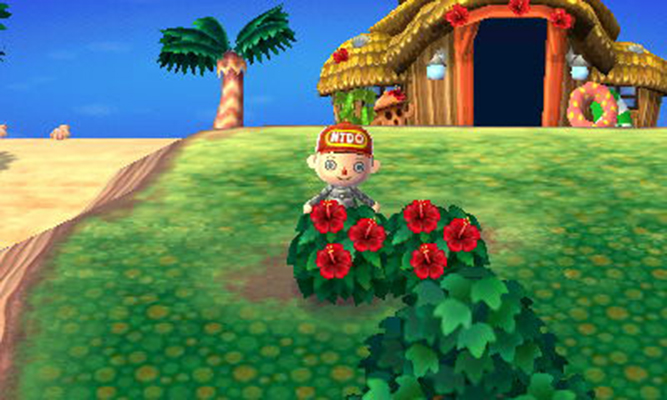 As I walked around the island, I saw a large fin sticking out of the water. It looked like a shark! I’d been trying to catch one for days! I cast my line in and the big fish bit. I yanked upwards and a battle of epic proportions took place. Well… Not really. It only took about 20 seconds to reel it in.

Bah! Still sharkless. At least it would net me a pretty profit back home. I returned to Meowland and headed to the post office to see how much money I had after selling my collected goods for the day. You could say I’m doing pretty good for myself at the moment.

I had enough to pay the remaining amount left on the bridge donation fund. Finally I will have the bridge finished!

Done with that I decided I was done with the day. I went home and tried to relax. I was still depressed and still lonely. Some of the animals are cool, but they don’t connect with me on a level that another human can. I fell asleep.

I heard a loud dining noise as if I was at the train station. I opened my eyes and found that I was, in fact, AT the train station. Was I dreaming? The train pulled up into the station. Wow… The train hadn’t stopped here for someone other than a merchant since… Well, since I arrived here. A dapper looking gentleman stepped off the train.

He didn’t see me and ran into town. I chased him and found him at the bridge. I asked what he was doing here. He told me that he was the Mayor of a town called Fox. Hey cool, another young mayor like me! He said that he arrived at Fox just a few days earlier and was stressed from being made mayor against his will. Hmm. This was strange. It didn’t feel real. 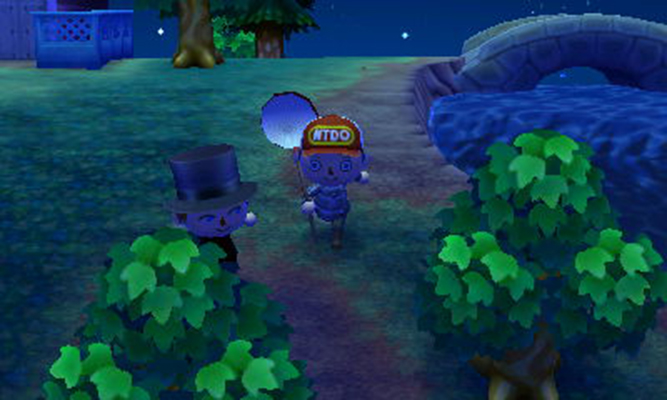 I invited him to come see my house. He said that would be great as he was living in a tent at the moment because he didn’t have enough money to put a down payment on a house… Coincidence much?

When we went into my place he saw my Super Toilet and was all like ‘Awesome!’ He sat on it straight away. I liked this guy.

We went back outside and I knocked the Top Hat off his head. I told him that he didn’t need to be so formal. 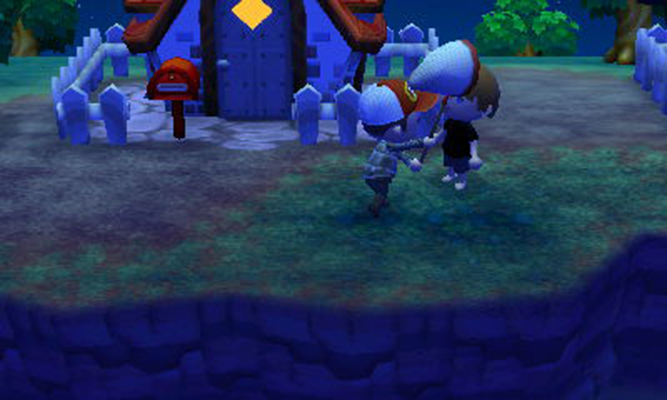 We walked around a bit and then just looked up at the stars for a while. It was good to have someone else to spend time with.

Next Cerviche pulled out his fishing rod and I led him to the pond. As he was trying to catch a frog, I noticed he wasn’t wearing any shoes. 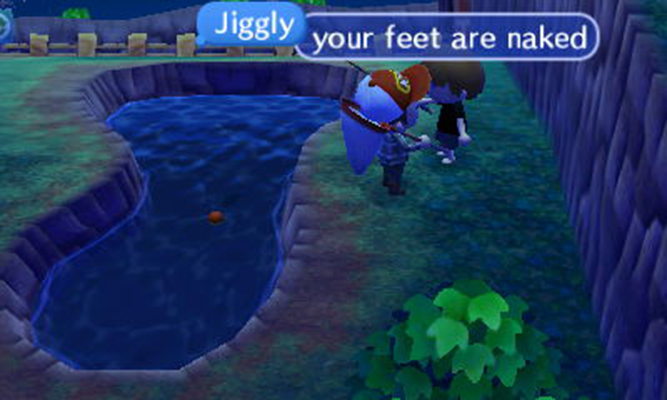 Proudly, he exclaimed that he got $50 for them. This guy was funny. We went to T&T Mart next and messed around with Tommy, the night shift raccoon.

Hehehe. Tommy looked worried but I told him we were only kidding. It had been quite some time since I’d had fun like this.

Before leaving back to Fox, Cerviche went to my message board and wrote something. I didn’t have time to go look at it because he quickly said farewell and ran into the train station. I tried to catch up with him but the train had already left. 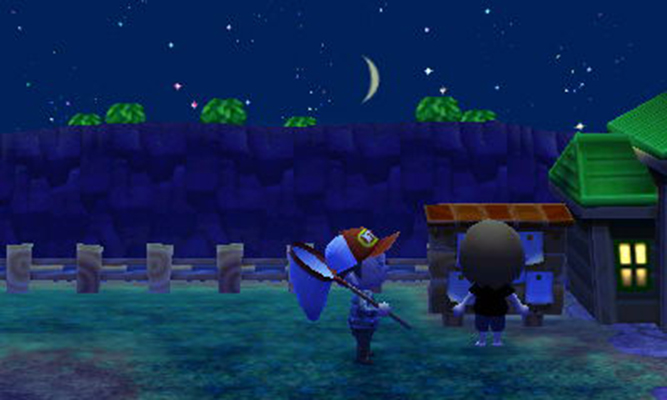 I went home feeling a little sad. Hell with it. I wasn’t gonna settle with this. I ran back to the train station and spoke to the monkey who was in charge. I told him that I wanted to go to Fox. A train pulled into the station. The monkey told me to jump on board.

Before I knew it the train was rolling up to the station at Fox.

To my surprise it was daytime! It must have been about midnight back in Meowland. How was this possible. I went in search for Cerviche. I bumped into a squirrel named Poppy. Somehow she knew who I was!

I asked if she knew where Cerviche was. She said I could find him in his tent. I went in search of it and found it pretty much straight away. 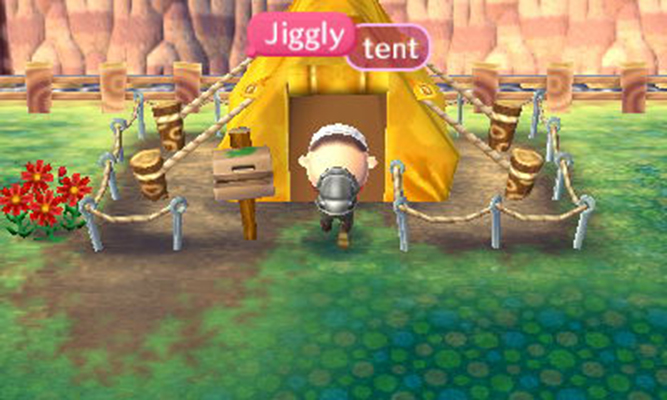 I went in. Cerviche was surprised to see me. He was happy though. We went outside and did some bug hunting. Cerviche caught a cicada. 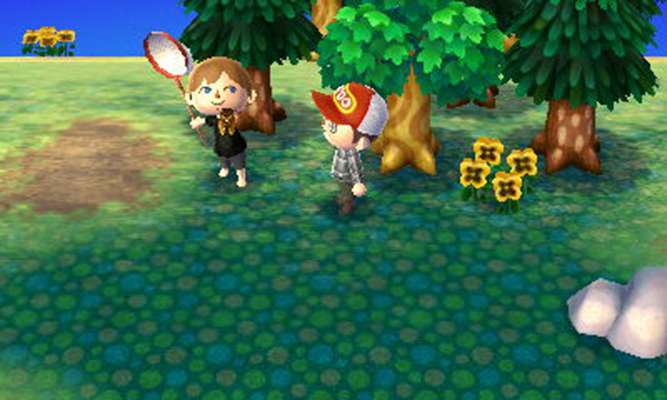 Next we went to Town Hall and Cerviche showed me his office. He had a puppy assistant too! She looked identical to mine… 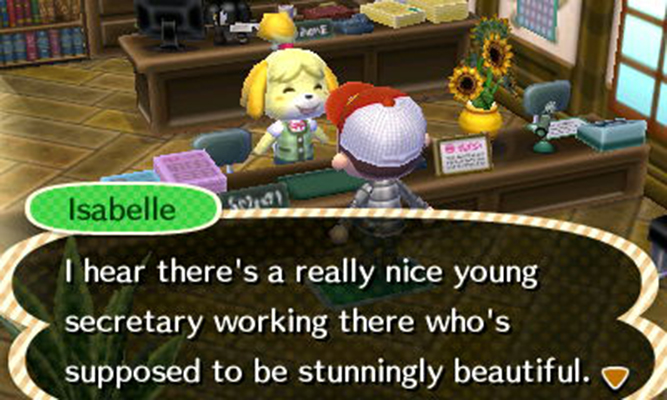 I went to Fox’s town notice board and put up a notice of my own.

I though it would be funny if everyone in town wore a shirt with my name on it. It was getting late and to finish of my visit, Cerviche said we should have a net fight. I asked him what that was. Suddenly he whacked me on the head with his bug net. I laughed and we spent about 20 minutes hitting each other with our nets. 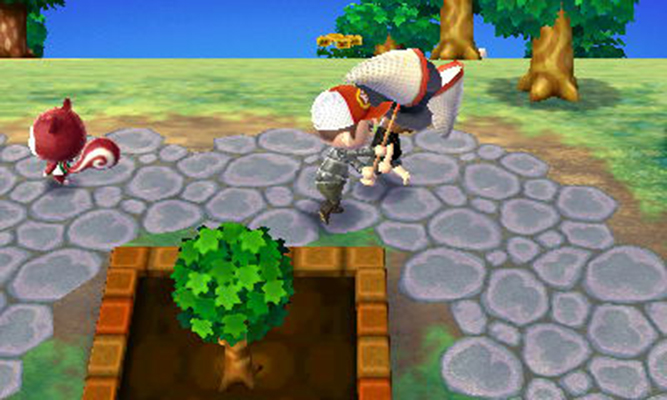 It was good fun, but it was getting late back in Meowland. I said goodbye to Cerviche and caught the next train back.

I went home to lie down. I thought over what had happened and was quite sleepy. Did it all really happen? Did I travel to a place called fox? Was Cerviche real or was it all just a dream?

Make Sure You Read Animal Crossing Diary – A Week Has Passed: Day 20 to 27