I heard the buzzing of my alarm clock. It was 10:30am. I wasn’t ready to get up. I hit the snooze button. The alarm went off again ten minutes later. I shut the machine off. I lay in bed and fell back asleep. The dream I had was weird. It was like a culmination of the previous dreams I had that night, just from a different perspective.

When I finally woke up and saw that it was 11:45 I freaked out. I only had 10 minutes to find the old hag that sells the turnips! After last weeks loss I wanted to try again. I jumped out of bed and put on my pirate clothes, then ran out the door. Where the hell was she? I searched everywhere and finally found her near Fangs house. She was selling turnips at $96 a piece. I decided to spend big compared to last time.

I had like $70,000 so I wasn’t too fussed at spending this much on a possible investment. And if I lose out I can make that cash back in a day easily. As I headed to check on my orchard I saw a piece of furniture laying under a tree. As I approached it, suddenly it sprang to life as some kind of insect! Scared the absolute crap out of me.

I tried to catch it but it ventured behind some trees and I lost it amongst the greenery. I started looking for more bugs to catch so I could donate them to the museum. the cicadas are out in force at the moment and I caught like five different types. I also captured some dragonflies. I started digging around in search for some fossils too. There must be something wrong with me because for the second time this week I missed the ground when trying to dig and fell victim to one of the trap setting son of a bitch’s pits.

I went in to the museum to donate my findings. As I walked in I saw Blathers standing there looking like he was contemplating something. This was odd because he is usually asleep during the day.

I asked him what he was thing about. He began to tell me that there is a second floor to the museum that is going to waste. Currently it was closed due to lack of exhibits and was in need of a refit. He had the idea to fix it up so that any of the residents could display anything they want there – to make it a public exhibit. I told him that it was a good idea to get the people involved. As the museum is government funded he asked if it could become a public works project. I told him it could and that when the bridge is finished it shall be top priority.

I went over to T&T Mart to browse today’s wears.

I ended up purchasing some Lab wallpaper that was very Portal-esque along with some playing card themed paper. I also took both fortune cookies. I went to the park overlooking the ocean and gobbled them both down. That’s a funny word isn’t it. Gobbled. One of the prizes I had won before. It was a Bullet Bill Canon. The other however was brand new.

I went back to see Tommy and handed over my ticket. He didn’t look too impressed and said that I sure do get a lot of prizes. Well he shouldn’t sell the things if he doesn’t want me to buy them. He gave me a Power Star and I left.

I feel like since expanding, Timmy and Tommy have started to turn a little spiteful. I liked them better when they ran their smaller operation. As I headed back into town I stopped by the bridge fund to see how it was coming along. Still moving slower than I had hoped. It could be a while until that museum gets fixed up. I chucked in some coin and continued on.

When I got to the village I visited a few friends. Princess Leia was nearby and I saw she was wearing the Mario design I made on a scarf. I told her that it was cool and I hoped she liked it. She told me it was one of the best design she had seen at the tailor in some time.

As I continued on Fang stopped me in my tracks. He said that he was pretending to be a game show host and asked if I could play along with him. I told him that I was down for it. He asked me a bunch of quiz questions and ended with “Who do you hate most in this town after Tom Nook?” I answered with Goaty Creature. He said that was right and threw confetti in the air.

As we were finishing up, Fauna came to me and asked if I wanted to go over her house later today. I didn’t know here that well and figured I would. Fang was still nearby and looked a little jealous. I felt bad as he is my best friend in this town. 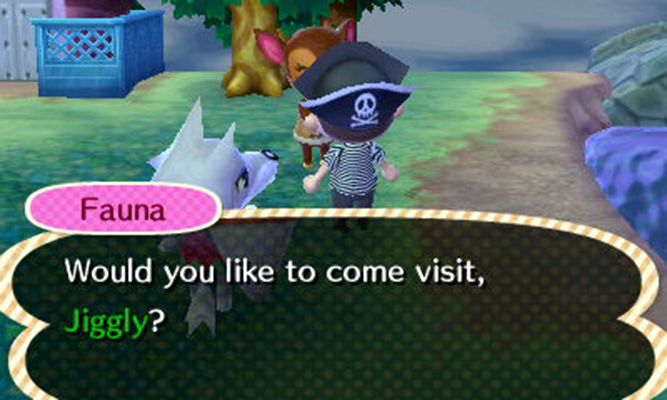 After having fallen into another trap today, for the who know what number of time, I wanted to see it from someone else’s perspective. I buried one of the traps I had found and pulled out my megaphone. I called for Boone. He was nearby and came a runin’. Little did he know, I was standing right behind the trap. Down he went. He was pissed. I worked out that when someone stands over the trap the ground below collapses and you flail about for around a second and then get sucked down, rather than falling in.

Dizzy, the weird hybrid elephant-mouse creature was nearby and came up to me. He said he knew what I had done to Boone and that he thought I was a jerk. That’s okay. I told him I didn’t like him either and that he should go away. He didn’t appreciate the scientificness of what I was doing. I wasn’t happy. I went to the town notice board and aired what I thought. 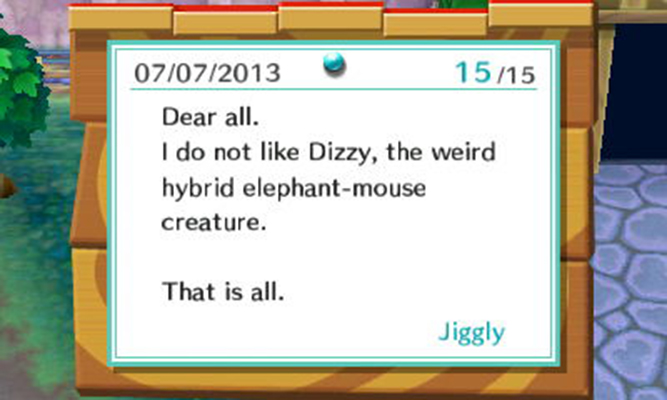 I wanted to calm down and take some ‘me time’. I grabbed my fishing rod and went to the beach. I spent the next hour catching a wide array of different creatures. Carp, clown fish, squid, puffer fish and even a tin can! There was one fish that stood out above the others though…

After I went to the museum and handed over the sea creatures and making a joke to Blathers about not eating them, I got the feeling over me that I had forgotten something. I looked at my watch. It was 3:45pm. Oh crap! I had forgotten about going over to Fauna’s house! I ran down there and saw she was outside crying. I told her I was so sorry and that it totally slipped my mind. She said whatever and that It wasn’t that important anyway. She told me to leave her alone.

I headed home. As if on cue, the skies started to turn dark and cloudy. Fauna was angry at me. Fang was probably still jealous. Boone was all pissy and Dizzy hated my guts. I went inside and sat down, looking out the window. It started to rain. I watched as the water droplets rolled down the glass into other droplets and formed big ones. The power went out. Great. I’ll just sit here in the dark. It was night and the clouds made it so dark, covering up the moon and stars. Suddenly, as if a button was pressed everything went pitch black.