I woke up this morning feeling… Strange. I was too sleepy. Usually when I wake up I feel okay, but now I was kind of dizzy. I looked around the room. My house was bigger. How the hell did Nook manage to do this while I was here? There is definitely something fishy about this. I mean a whole house remodeled overnight, yet it takes days for whatever these new stores are to be built.

None the less, at least I have more room now. Room for a bed even. I made a mental note to remember to stop by Nooklings to see what they have. I didn’t really feel like getting straight to things today as I was feeling sleepy. I decided to go for a walk amongst the trees to try and wake myself up. As the sun shone through the branches onto my face I started to feel better. All of a sudden I heard someone behind me. HA! Not this time! I didn’t even turn around. I started to run. No head wound for me today! As I ran I heard shouting. I stopped. It was just Fang chasing me.

I felt a little silly. Fang caught up to me and asked why I was running away. I quickly made up some excuse about playing tag and he was it. Fang laughed and then tagged me while shouting I was now ‘it’. I congratulated him and said he won. I asked Fang what it was he wanted before we started playing. He mentioned that he wanted to see my bigger, new and improved house.

I said why the fudge not and led the way to my door. The ever gentleman I am, I let him in before me. He looked around at everything, surprised how neat it was. I told him that Nook’s crew must have tided it after completing the extensions. He saw the butterfly on my green drawers and said how cool it was and that he wanted one. Then he went all quite for a bit. I asked if he was okay. He said that he had a butterfly once as a pup and that he didn’t want a repeat of what happened those many years ago. 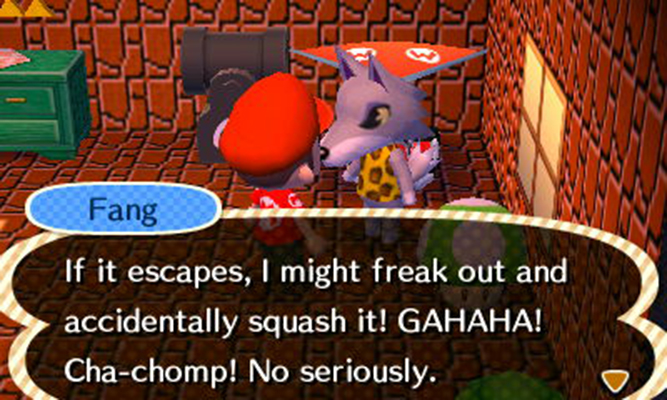 Fang said it was around his lunch time and that he should go. I told him to stop by anytime. I headed back outside and saw Fauna. She asked how I like my new house. I said it was good. She metioned how she had her house enlarged a while ago too. I still had something bothering me about how it was done so fast. I wanted to ask her about it.

I asked if she knew how they built it around me without me knowing. She told me that Nook has the builders drug you when they first arrive so you don’t wake up while they are there. It was part of the Nook service. Well that would explain the sleepiness.

Speaking of sleepiness, it was time to go looking for a bed. I got to the shops and saw a big blue tarpaulin over Nooklings Junction. Ahh, crap. I had totally forgotten that they were going to be closed today for expansion. That was annoying. The two new shops were finished though. I was kind of excited to see what they were. I went into the first one.

Inside I could smell fresh flowers and soil. Okay, a plant nursery. I could live with that. I looked at what they had available. Nothing amazingly awesome… Except for an axe! I picked it up and examined it. The shop assistant approached me. I turned around and nearly freaked out. 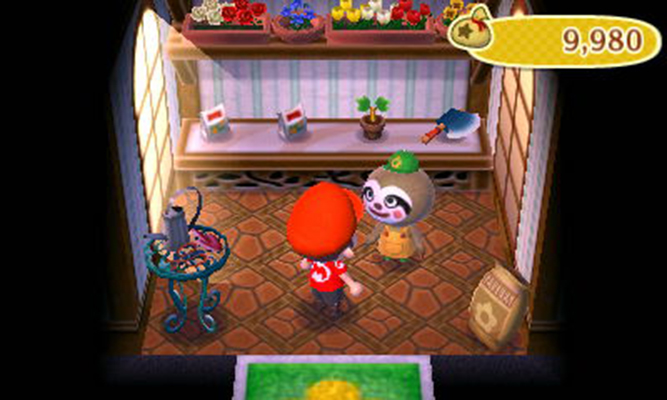 What the hell was this? A sloth in clown’s makeup? I have to say, he made me feel quite uneasy. He introduced himself as the proprietor of the shop. I tried not to make eye contact. I told him how nice that was. I gave him a bunch of money and left with the axe.

The other new shop was a place called Kicks. It sounded cool and it was obviously a shoe store. I went inside but didn’t expect to find anything better than the Hero Boots I was currently wearing. There wasn’t. That was fine though, as the skunk owner told me that stock changes daily, just like the Nooklings store.

I still needed a bed. I headed back towards the village to Re-Tail to see what they might have. It had been a few days since I had fallen into a trap. I guess that’s why it surprised me so much when it happened. If rule one was to suspect everybody and to trust nobody, rule two had to be always keep your guard up. I had to live by rule two.

After clambering out of my earthy hole I went into Re-Tail. They had nothing that even slightly resembled a bed. I sighed. I heard a noise that reminded me of sleep. It was snoring. I looked to my right and saw a whole other side of the shop I’d never gone into. Sleeping in a chair was a blue llama creature. Apparently it was the pink one’s husband. He works the night shift and sleeps during the day. I found that rather odd as I’d only ever seen Pinky. The shop closes at 11 and I’d never seen this blue one working. Actually I’d never even seen him ever.

I guess it’s still sleeping on the chair for me. I remembered about the old mayor, Tortimer’s, invite to the tropical island where he lives.  I guess now was as good a time as any to check it out. I headed down to the beach. As I was walking along I saw a rather large bird passed out on the sand. The ocean kept splashing waves into his face. I figured I should try to wake him before he drowned. He was pretty out of it. I slapped him in the face about ten times before he came to. I asked why he was here.

I told him he should take it easy and then went to the dock to head over to the island. As promised, there was a boat there waiting. I hopped on. It was $1000 to get there and back. I was in a fair bit of money so I payed it without a second thought. The Captain of the boat, who’s name was Kapp’n, sang a song on the way over. Half way through the song he struck up a conversation.

He didn’t know my mother. I have no idea why he asked. We arrived at the island and I disembarked from the boat. I walked into the visitors center. Inside was a tour desk, an old turtle that sold stuff but wouldn’t accept bells as currency and a child turtle that wanted to buy all my stuff for a pittance. 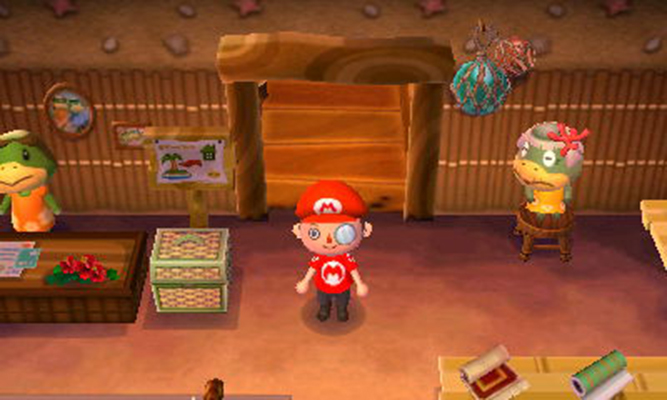 I went for a walk around the island to soak up the tropicalness of it all. I was bored. I did a bit of fishing and caught a scary looking bug too. I shook down palm trees for their coconuts and I stole all of the islands naturally growing fruit, the lemon. 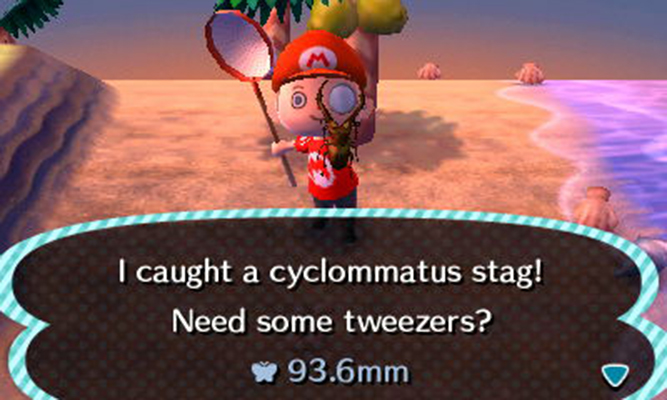 I went back inside and spoke to the tour lady. I chose the Labyrinth tour. A boat took me to another island were Tortimer was waiting. He challenged me to find five coconuts hidden in the hedge maze with 5 minutes. Bring it on! Turns out it was harder than I thought. I got hell lost. Amazingly I found all five but then struggled to make my way back. With a mere 20 seconds left on the clock I found Tortimer again. He game me a bronze medal for my efforts.

It was time to go home. I caught the boat back to the island and then transferred to Kapp’n’s boat to take me the rest of the way. I thanked him and figured it was time to do something Mayorly.

It was ordinance setting time! I went to my office at town hall and my assistant welcomed me with a smile. I smiled back. Being that I don’t know her name, I announced that I was going to call her Sally for the rest of the day, just to mix things up. The only way this could fail was if her name actually was Sally. She laughed and said that was fine, as long as she could call me Jerome. I agreed to these terms. We looked at the list of possible ordinances and given the current state of bridge donations, I enacted the one that would lead Meowland to a growth in shared wealth. I went to the notice board to let everyone know.

As the day was closing, I figured I should see some friends. First I went to the elephant to see if he had any new information about the trap setting son of a bitch. He didn’t. He did however ask me to deliver a package to Fang. This was odd, as Fang was literally like 10 meters away. I told him this and he said he was too lazy to bother.

I took the package and walked the short distance to Fang. I handed over the package and he excitedly ripped it open. It was a new shit. He put it on and asked my opinion. I almost burst out laughing. I told him it looked great. 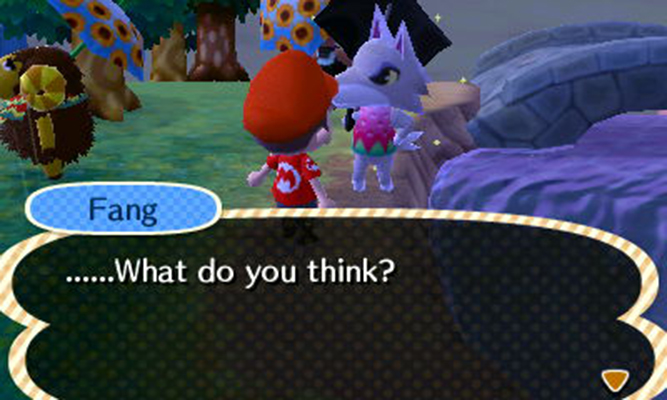 With appreciation, Fang gave me a shirt in return. I went back to the elephant and told him about Fang’s generosity to me. He was pissed and complained that his laziness had cost him once again.

I knew he wasn’t angry at me. I made my way home but was stopped by Princess Leia. Straight to the point, she told me that she had a compulsion every time she went shopping. She would always buy the same item every time she went and as such, wanted me to have this one.

Woo! A super toilet. Now I wont have to settle with my poop going into just a regular toilet! I ran home and tested out my new gift.