I was having trouble sleeping. It was early in the morning. Or late at night. Depends on your perspective. Either way it was about 3:00am. Maybe it was from not having a real bed to sleep in or maybe it was from the thoughts of my past running through my head. I figured there was no point sitting here awake, so I decided to go for a walk. I went out the front of my house and to my surprise, the test trees I planted had fruit. The oranges where firm and plum and the apples were as flawless as their sapling.

I shook the fruit free from the branches upon which they grew and the fell fast to the ground. I picked them up. I will wait until daytime before I go ahead and plant these. After all I hadn’t scouted a location yet.

Everything was quiet as I walked through the village. The animals must have all been asleep. That was fine by me. I didn’t really feel like talking to anyone or doing odd jobs for them. As I approached the bridge I could hear something making a noise. I hid behind a tree and peeked out. I saw Boone. Well the ‘female’ Boone. He/she was near the bridge with a shovel. I couldn’t believe this. Was Boone – or his alter ego – the trap setting son of a bitch? I had to follow at a distance to see what he/she was doing. 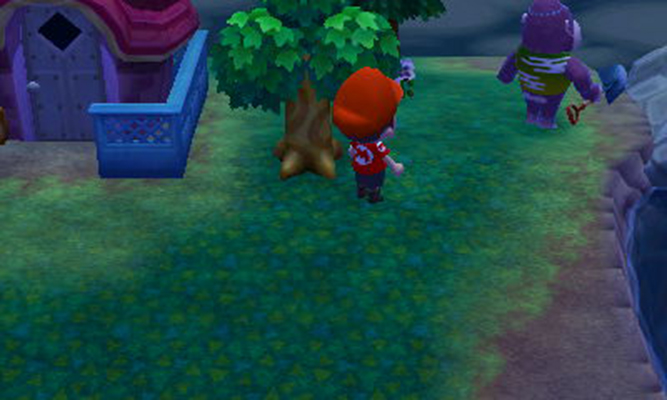 The next thing I knew, I felt a sharp pain in the back of my head. I fell to the ground. I remember seeing a dark figure standing over me as consciousness faded.

I awoke in a dark room. I felt a presence nearby.

I sat bolt upright. Standing by the bed was Princess Leia. I looked around the room. I was in her house. She told me how she found me passed out in the town while she was going for her morning walk. She had put a bandage on my head and commented on my purple underwear. She gave me my pants and I told her what had happened. We discussed the possibilities.

Leia agreed to help me, Fang and the elephant in finding this bastard. As I went to take my leave I remembered the glove I had found yesterday. I gave it to Leia and she thanked me. She told me how she thought it was gone forever. It turns out the glove was given to her by her co-star Mark Hamill. It was the glove that went over his robotic hand when Darth Vader cut off his regular fleshy hand. I was impressed. It was pretty cool. Leia sighed and said how she doesn’t talk with him anymore because he scares her since he portrayed the Joker in the Batman games. She produced a picture of him and told me that this put her off him too.

I made my way over to Fang’s house to discuss what had happened. He said that would explain why I wasn’t around all day. Suddenly Fang remembered about a package he received. It was accidentally delivered to him instead of Boone and he opened it without realising. 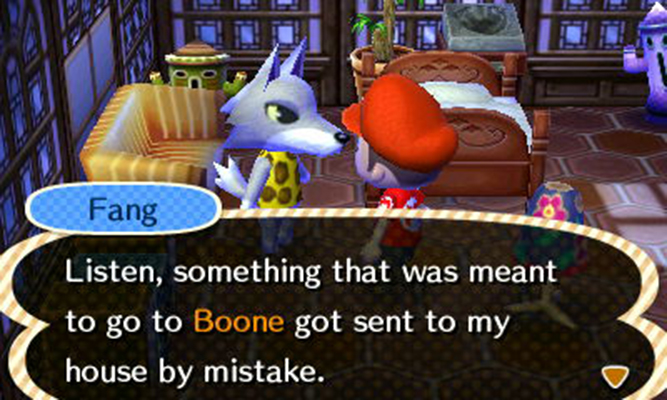 It was a pit trap. This was not looking good for Boone. But Boone? Really? He was a meathead. A meathead with a fetish for dressing up as a woman. I had to talk to him. Last night I saw him as She-Boone so I figured I should speak to him as his alter-ego. I found She-Boone near the river. She had been bug hunting. I walked up to her and asked the question straight out. Was she the trap setting bastard. I told her what happened last night. She laughed it off.

It was an odd response. She had been called worse. Did she have dark secrets? Or did she consider these traps to be trivial. Either way she neither confirmed or denied the accusation. If Boone was a part of this he/she now knows of my suspicion. I laughed and walked away.

I needed some kind of security. I was at risk now, and next time I might get more than just a bump on the head. I went to Nookling Junction to see what they had. Nothing. A dentist’s chair and what looked like a shower screen. I asked Tommy if he had anything in the way of home defense. He told me that he only has the stock that’s on show. He did however, recommend buying today’s fortune cookie. I payed my 2 coins and ate the so called treat. I handed over the note inside. I had won a fire bar. The nookling pulled through! I raced home and set it up. 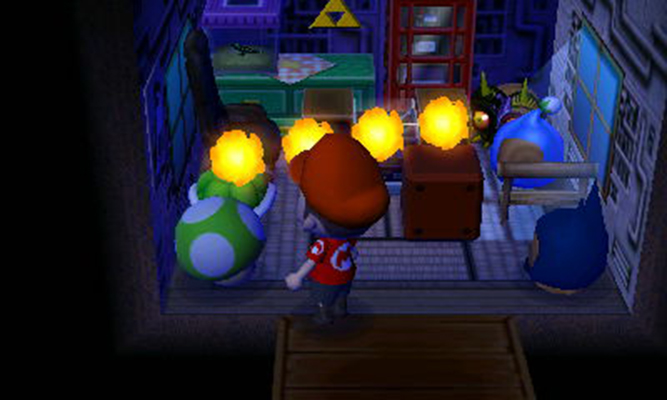 It was time to sleep. Even though I spent a whole day out of it I was still tired. I guess a head wound will do that to you.

The next morning I headed out. I ran into the elephant. I hadn’t told him about yesterday, and being that he is a part of the investigations team I should fill him in. He told me he wasn’t surprised. He said that when we discover who is behind all of this he is going to get everyone together to hunt the bastard down. 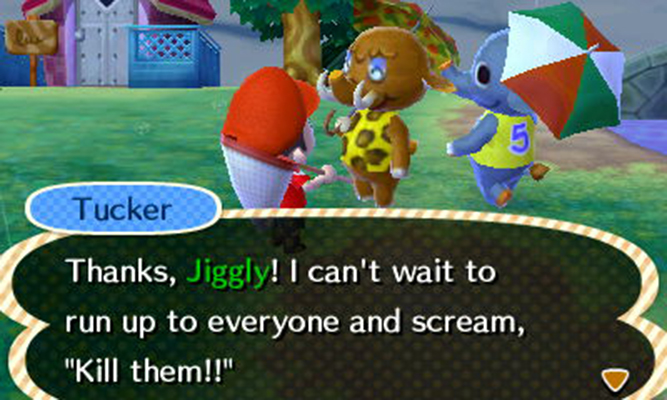 As I continued on my way He-Boone ran up to me. He asked me how I was going. What was he thinking? After last night he was acting rather normal. I asked him if he remembered what we talked about. He said we didn’t see each other at all yesterday. So he wanted to play it like this. I reminded him of his she-self. He looked a little defeated. He appologised and said that he likes to keep his personalities separate. I told him that wasn’t healthy. I told him to embrace his lifestyle. I told him it’s okay to be one Boone. Just Boone. Boone who likes to be a woman sometimes. He said I was right and thanked me. 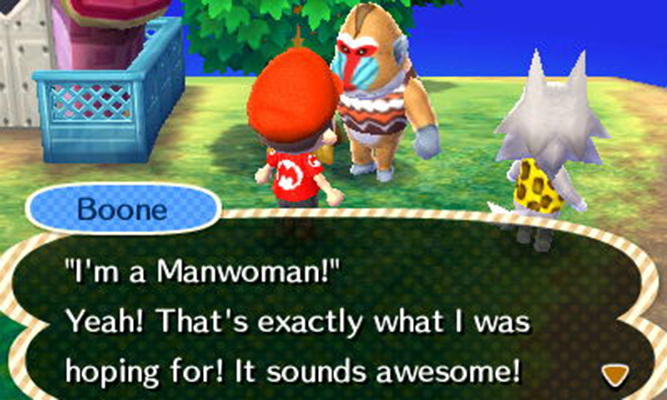 I did my usual shell and apple hoarding and went to sell my collection at Re-Tail. I also had a fossil that Blathers at the museum didn’t want and an arowana fish. I was offered $30,000. That was enough to pay off my house! I went straight to the post office and deposited the remaining $27,000 odd into my loan. It felt great. I went and saw Nook to tell him the news. It would be good to be rid of him.

Nook was more excited than me. Probably because he knew I would take up his next offer. A home expansion. I didn’t want to be in debt to this guy again but I did need more room.  I told him to go ahead and do it. The works would be completed by tomorrow morning.

As I wandered around the shops there was another scaffolding set up. I should really go to work tomorrow to find out what’s going on. 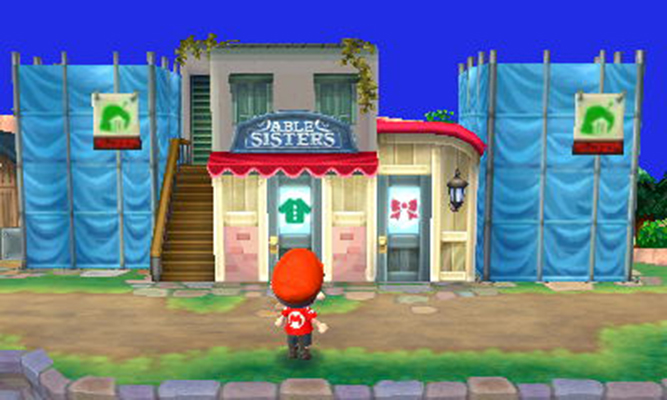 I went into the accessories store and something fancy looking caught my eye. It was a monocle. It was very sirish. I bought it.

I went to the nookling store. As I entered I was told that they would be closed tomorrow for expansion. Just as well. Once again there was nothing I wanted to buy, besides my usual Chinese – originating in the USA – treat.

I took the fortune to Timmy and he exchanged it for a Bullet Bill cannon. I’ve gotten quite the Mario hoard. In fact, I decided to try and win over the otter from the home judging board. That would have to wait until later as for now I wanted to look for that huge fish from a few days ago. I went to the beach. On the dock I saw an old turtle. I’d never seen him before. I approached him and asked why he was here. 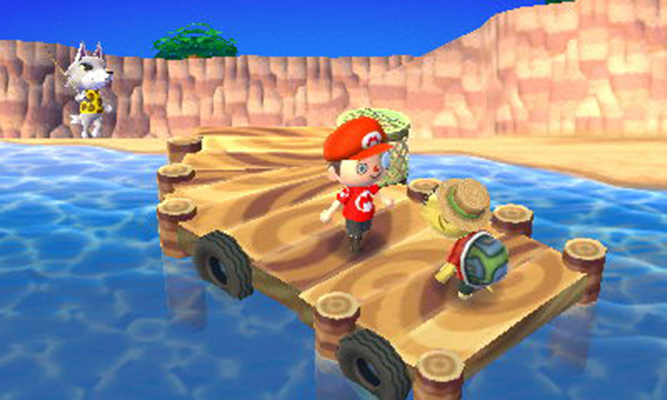 As it turns out, he used to be mayor of Meowland. Of course. I just remembered the picture of an old turtle in my office. He said that he was from a tropical island nearby and that I should come by one day. Apparently there are rare items to be found that aren’t in Meowland. He highly recommended bringing some friends. Ha. Friends.

I remembered about my fruit and went looking for a place to start my orchard. I chose a nice bit of land above the river an below the town plaza. I marked the area with flowers so I could find them again easily.

I went home to redecorate my house. First I put all the stuff that shouldn’t be out into the green drawer. Even though a lot of it is cool, I needed to win over that otter. I set up the Mario items as best I could. Then I went to work on making some wallpaper and carpet. I found a template online and spent the rest of the day making it and applying it. I think the otter guy will like it. Well even if he doesn’t, screw him. 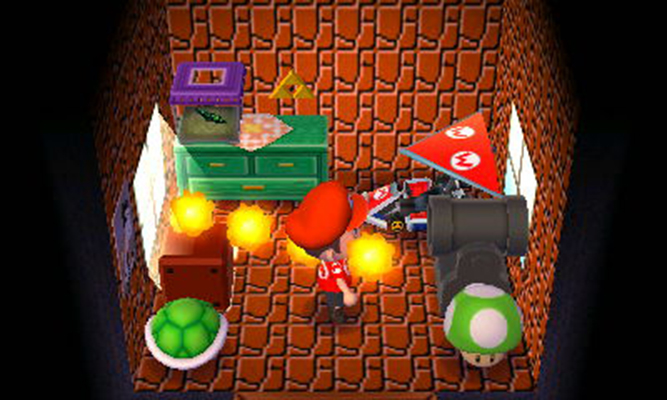