Another fine morning. I could hear the rain hitting my roof and rolling off in big drops to the ground below. I looked out the window and saw my fruit trees had grown even more overnight. I made the decision to not go to the office today. I knew there was nothing I could do. I didn’t have $20,000 for an ordinance and the new bridge was still in donations stage. I figured I would just spend the day goofing off and doing whatever I wanted.

I headed down to the beach to collect some shells. I wanted to sell them so I could start paying off my home loan to Nook. Ah, yes. Tom Nook. The Bastard raccoon who takes too much pleasure in taking peoples hard earned cash. Tom Nook who puts his own, well I assume his own, young children to work. The twin tanuki children forced into labor. As I walked along the shore picking up coral and sea snail shells, I spied a big dark shadow in the water. That must be some fish. I took out my fishing rod and cast it in. Nothing. I tried again and again. Finally it took to the line. I yanked hard but nothing.

It swam away. I didn’t get a good look at it but I knew one day it would be mine. It was my Dick. My Moby Dick. Or my Ishmael. I don’t know I never read the book. All I know is that I shall catch it. As for now it was time to socialise with the residents. First I spoke to her royal highness of Alderaan, Princess Leia. She was happy to see me and asked if I wanted to come over to her place later today. I saw Fang sneaking up behind her to listen in to the conversation. He winked at me to let me know that he was keeping an eye and ear out for the trap setting son of a bitch.

I asked Leia if she meant ‘come over’ like as in a date. She smiled and asked what time I wanted to come over. I told her to save 1:30pm for me. Leia left, looking quite happy. Fang approached me and we discussed the possibility of Leia being the trap setter. It was doubtful but I agreed to keep my guard up. Fang told me that he knows her deepest darkest fear if we need to use it against her and began to tell me how she hates cicada shells.

A new resident moved to Meowland today. I went to their freshly built house and let myself in. Standing there was some kind of hybrid mouse-elephant creature. It screamed as I walked in. It screamed that it wasn’t ready for visitors yet and to not look at it, NOT LOOK AT IT! I left. Frankly I couldn’t stand looking at it anyway. 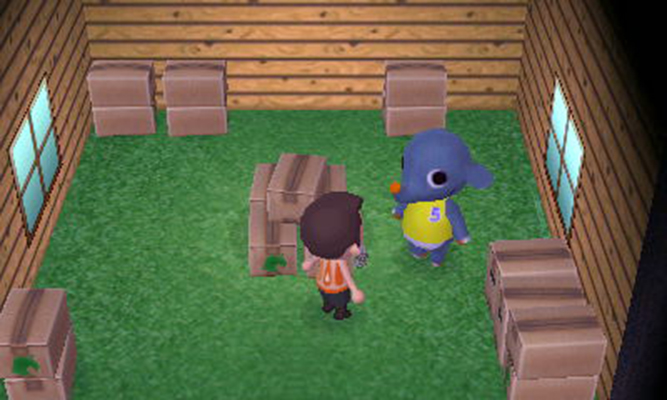 As I took my leave, I checked out the area behind this strange creature’s house. There were soft soil patched everywhere. This was odd. I wondered if any of them were traps. 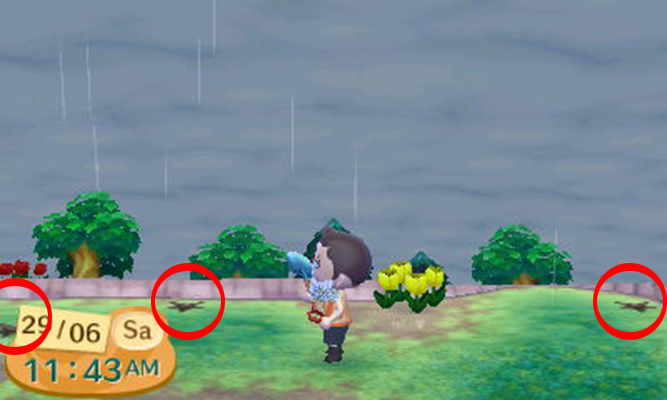 I dug into them and revealed three new Gyroid fire-hydrant things. I continued my exploration for traps and whatever else might be buried. I found another Gyroid and some fossils that I would later donate to the museum. Finally, for the first time, I found one of the traps before I had the chance to fall into it. At last I could see what it was and maybe work out how it has been engineered.

I passed through the Town Plaza and saw a strange tent set up in front of the tree. Wearily I approached it. Last time there was a tent here I wasted $3000+ on a fake painting. I walked in. Inside sat a black panther with candles lit in front of it. She introduced herself as Katrina the fortune teller. I admitted to her that I’m not one to believe in such things. For $300 I figured I would entertain her. For the light show alone it was worth the money. There were some pretty fancy special effects going on there.

After the lights came back on Katrina told me my fortune. She said I was in for a hard time with money. Well that was obvious. I’m new to town, I’m the mayor who has to pay for everything and Tom Nook built my house. She said the tulip hat would save me. Umm, yeah sure. Whatever that meant.

It was time to man up and talk to the dog I practically assaulted a few days ago. I removed my beard disguise and approached him. Already I could tell he had forgiveness in my eyes. I told him that I was out of line and that I was sorry for what I had done. He said to me it was okay. My assistant, whats-her-name, is his sister and she told him all about the stresses I’d been going through as Mayor. I told him he was a bigger man than I and thanked him. He told me that he understood and that quite a few people get mad at him. After all he was just doing his job and had to tell everyone about what was beyond the gates even though most of the time there was nothing. He said that in Japan there are always display homes to see.

I went to the accessories store in search of a new look. There were two items that caught my eye. First was a Mario hat. It was awesome! I bought it there and then. The other item was listed as a “King Hat” I think they meant a crown. Either way it would go nicely with my beard disguise. I asked the price and was quite disappointed…

I left the store and put on my new hat. I spent some time designing a new shirt and put it on, completing my new look. I must say, I felt like rescuing a princess. Well not really. I wanted to explore castles. I don’t care about princesses.

I saw Boone. Normal Boone, not cross-dressing Boone. He started to talk about Time capsules. He asked me if I could bury one for him. I said I would and left. My interest got the better of me and I opened the time capsule. Inside was a letter and a toy bear. I tried to put the bear back in the box but couldn’t. I buried it to hide my shame. I went back to Boone and gave him the time capsule. He was surprised I hadn’t buried it. He was even more surprised when he found out…

I looked at my watch. It was 1:30pm. 1:30! I was going to be late to Princess Leia’s house! I ran as fast as I could so I wasn’t to embarrass myself through extreme tardiness. I walked in the door at 1:35pm. Not too late at least. Leia welcomed me in and if she was angry or disappointed at my lateness she didn’t say so. We talked for a while and the I got distracted by her huge television. I watch some Spanish soap opera for about twenty minutes. Leia asked if i liked anything in her apartment. I admitted there was nothing to my taste by it all looked nice. She said I must be drunk because the design was terrible and outdated. She did say she appreciated my honesty. It was time for me to leave. I thanked her for her hospitality and said we should do it again some time.

I hat to make good with Boone. I went back to the spot where I buried his bear and dug it back up. I wrote him a letter and attached the bear as a present. I went to the post office and dropped it off for delivery.

As I made my way home, feeling good about how the day went, I saw the majestic blue butterfly I liked so much. I pulled out my net and crept up towards it. Gently I swiped through the air and caught it! It was purdy. I decided to keep it in my house as a pet for a while before I donate it to the museum. I sat and admired it for a while and then called it a day. I sat back in my chair and fell asleep. 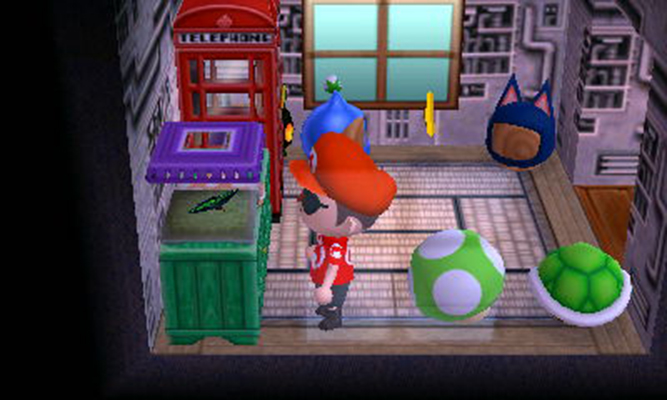