It was 10:30pm by the time my train pulled into the station. I had been sitting there minding my own business when some cat-like creature approached me. He introduced himself as Rover. Strange name for a cat. Maybe his parents were hipsters trying to give him an ironic name. Either way I didn’t ask for his company. He asked me my name. I tried to think of a fake one to give him. I considered to use my go to fake name, Nigga P. The words almost slipped out my mouth but I caught my tongue. Possibly, that name could be conceived as inappropriate. I decided to let my guard down and gave him my true name. Jiggly. He said it was an interesting name. I replied with a “Yeah, it’s cool.” Rover mentioned something about my being a male of the human species. I was appreciative. It wouldn’t have been the first time a stranger on a train mistook me for a woman. He asked me where I was headed. Nosey little bastard. It had felt a lifetime since I’d had someone real to talk to. I let him know I was going to Meowland. I had no place to stay. I just had to leave the town I was in. The train pulled into the station. Rover wished me luck. I wondered if I’d ever see that little guy again.

I stepped off the train and made my way down the platform. Instantly I was surrounded by animals. They kept referring to me as their new Mayor. I tried to tell them I was no such thing. I was just a stranger blowing in from the east. They wouldn’t take it. A young puppy took me to the town hall. She wanted me to complete some paperwork to make this whole Mayor thing official. As it was being done she said I should go see some guy called Nook. He was in the real estate business and I was in the business for some real estate. I found his office, that for some reason, was open this time of night. He had me choose some vacant land. I settled with a secluded spot on a cliff face overlooking the ocean. Nothing like this back home. Building is going to take some time so this Nook character set up a tent for me temporarily. More than I’ve had for months now. 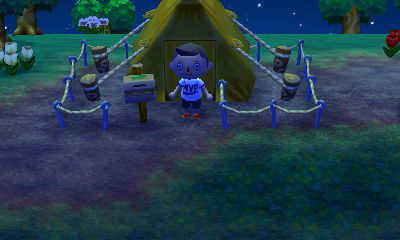 I went back to the puppy in town hall and finished the paperwork. She took me out to an open area. The animals surrounded me again. They demanded I plant a tree to symbolise something or rather. I’m not exactly sure what. It all seemed rather cult-like to me.

What had I gotten myself into…

I explored the town and spoke with the residents. I explored the local shopping area. Nothing was open. I sat on a bench for a while and looked out over the ocean.

I didn’t know what to do. I thought about what had happened for the past hour and a half. I decided It’s time to take what life throws at me. I will take on this ‘Mayor’ role. Too many times I have run away from what’s put on my plate, but not this time. No. Not this time.