Last week I played Firewatch. I’d had it for a while and was putting it off for no good reason. As the term “no good reason” suggests, I don’t really know why I hadn’t played it yet as it’s the kind of game that I instantly want to play the minute I see it.

People call Firewatch and other games like it “walking simulators”. I think this is a terrible description, no matter how accurate it may be for some of the games in this genre. I prefer to call them one of the following:

Walkie Talkies applies to Firewatch in more ways than one and so far is the best in the genre I’ve played. If I had the time I would have sat down and not moved until it was over, which is rare for me. The story was gripping, the art style is perfect and the voice acting is, quite simply, perfect.

It’s set in a world where you just wanna sit back and enjoy the view or take a stroll through the forest and admire how pretty everything is. Yet, there were points in the story where I felt the tension deep inside me or even a sense of urgency. The story was heartfelt, took a couple of impressive turns and seemed more real than most anything else I’ve played. I don’t even get that from most movies. Speaking of movies, it was even a little reminiscent of an 80’s adventure movie at some points.

After finishing the game in just two play sessions (impressive for me!) I moved on to Gone Home. Without spoiling anything, it seems these style of games have similar elements to them in the progression of their stories. Like Firewatch, Gone Home kept me interested the whole time and I actually did play it through in one sitting. Once again the voice acting is on point and the art style is nothing to scoff at. The story however, even though it was good, felt real and was endearing, I knew exactly where it was going.

Next up was The Vanishing of Ethan Carter. The third game that I completed from start to finish within the same seven day time frame. I consider this the weakest of the three. The voice acting was a bit hit and miss outside of the main character but the world does look amazing. It’s a rather large environment, albeit just a little bit too big. I constantly felt the need to go and walk through portions of the forest just to find that it leads to a dead end or an invisible wall. The trouble with this being you have to do this to activate some of the puzzles.

The story had some similar elements to the previous games, yet felt like it could have been delivered a bit better. It could have been the acting but the chunks of story you get when you complete a puzzle could have used a little more beef. There was also one section of gameplay that didn’t seem to fit with the rest of the game. It’s set in an underground maze where you have to avoid a creature, that when you come across it, gives you a jump scare and effectively “kills” you. 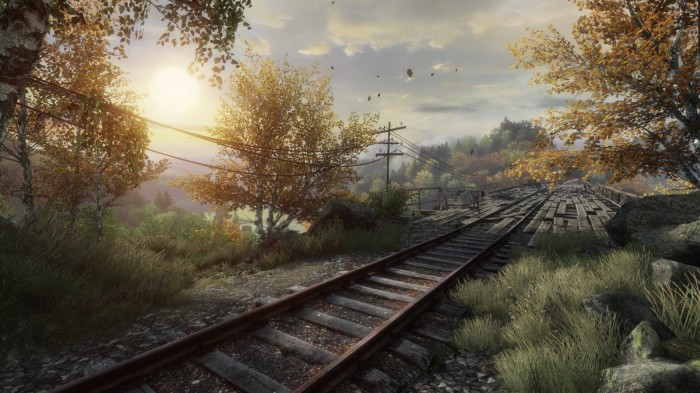 Before playing the game I read a few reviews and a couple of them said the story ends a bit ambiguously. I certainly don’t agree with this. It closes all doors and there are no loose ends. Maybe these people didn’t solve all the puzzles to get the last story element. Or maybe i’m just not open to seeing other possibilities.

I’m becoming addicted to these type of games and after playing through Firewatch and Gone Home I went ahead and got sixteen more of them by googling “games like Firewatch”. I combed through a bunch of lists, picking the ones that appealed to me either visually or from what Steam or Wikipedia told me about the story. If I keep playing through them at the same speed I am now I might write a bit about them. If not, just know that I considered it.

DID I SUCK AT IT: Not particularly. No dying = great.
SHOULD YOU PLAY IT: EFFIN’ ‘AY YOU SHOULD! I smell a GOATY award…
HIGHLIGHT: A story that feels real with characters that are relatable and sympathetic.
LOWLIGHT: I have to stop playing every five seconds to screencap a new wallpaper.

DID I SUCK AT IT: I did get lost at one point. It was also a little never-racking at the start.
SHOULD YOU PLAY IT: For sure.
HIGHLIGHT: A decent story presented at a good pace.
LOWLIGHT: I knew exactly where the story was going. Oh, and reading the handwriting on some of the notes is annoying. CURSE YOU CURSIVE!

THE VANISHING OF ETHAN CARTER

DID I SUCK AT IT: The maze in the mines suck!
SHOULD YOU PLAY IT: Well, it was okay. Not as good as the others. There were a few points where I said ” I don’t think I’m gonna bother playing through this.”
HIGHLIGHT: The Fake Interiors puzzle.
LOWLIGHT: Going into the forest for no reason. The story wasn’t as strong as the other two games.

3 thoughts on “Go for Walkies?”