It seems like we can’t go more than just a few months without seeing another story arise about a video game being ‘banned’ in Australia or how the Australian ratings system is “broken”.

Frankly, I should be able to end this here and tell you to go ahead and read that article to find out all you need to know. Unfortunately though, it seems that some popular, not-so-professional video game news sites have run articles on this issue with misleading clickbait titles and stories missing facts.

I’ve written a few times about the Australian classifications system, so you may know how I feel about this topic. If not I’ll sum up by saying I don’t necessarily agree with censorship and at the same time am of the opinion that Australia’s ratings system is not broken. If you need more clarification on what I think, take a look at the linked articles below.

My issue is not that these 220 odd games have been Refused Classification or the reasons why. My problem is how some of these gaming website have portrayed the issue.

Let’s take a look at the story IGN ran.

Let’s start off with the headline. It’s a misleading title designed to garner instant interest from readers to click on the story and visit the website. This headline was also posted across social media channels such as facebook and twitter.

Why is this headline misleading? Well, it’s factually inaccurate. That’s why. On a basic level the stated fact is true, but there is much more to it than just that. It also leads into the statement:

Singling out Hotline Miami 2 for the sake of this article is a little out of line with the story, as it was Refused Classification after being submitted for review to the Australian Classifications Board (ACB) and not from the International Age Rating Coalition (IARC) tool, which is the reason for an increase in games being Refused Classification.

The headline suggests the ACB has gone mental and are banning games left, right and center, rather than these games going through a new international system for classifying games. The article also neglects to mention that the IARC tool is designed specifically for digitally delivered and mobile games and apps. This means the story suggests that “mainstream” titles are included in this influx of games deemed inappropriate for Australian audiences.

What’s worse is that many people won’t even read the article and jump to conclusions without the facts and those that do read it aren’t presented with the whole story, resulting in reactions like this: 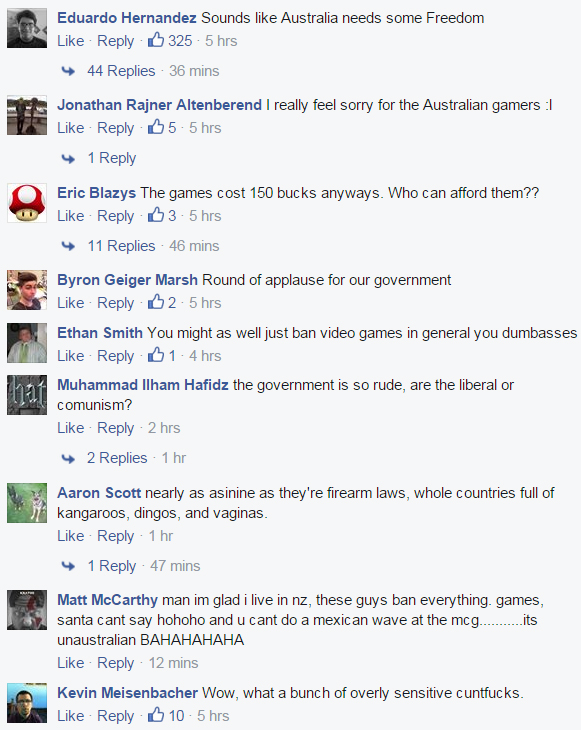 There are some valid quotes in the article, such as:

“Due to the online explosion, there are hundreds of thousands — if not millions — of games currently available online,” a department spokesperson said. “It is not realistic or practicable for the Classification Board to manually classify each of them.”

It’s true. It would be an arduous near impossible task for every single game and app to be classified by the ACB. It’s also the same for other countries ratings systems, such as the ERSB in the US and the European PEGI system. That’s why they too have adopted this process.

Make no mistake, the ratings given by the IARC tool are tailored to specific regions and their respective rulings, but they are judged by a common set of questions to deem what rating is applicable for each region. This means it’s a self assesed tool completed by developers or publishers. These games have been refused classification by the ACB via proxy.

It’s also unfair to say that this is a large influx of games being refused classification:

“The Australian government has banned four times as many video games in the last four months than it has in the last twenty years.”

While factually correct, the content is misleading. Let’s say there’s only one burger joint in town. That burger joint can only cater to a certain number of people each day, week, month, year, whatever. There is a maximum amount of burgers they can sell to a certain number of customers, be it due to location and availability. Now a year later a second burger joint is opened on the other side of town. Guess what happens? More burgers are sold. There are more burgers than there were before and they are accessible to more people than they ever used to be.

The burgers haven’t changed. The availability and means to get a burger in town has.

It would be fair to say that the number of games Refused Classification by the ACB is close to par than previous years. With the influx of self assessed games and number of games being rated with the IARC tool increasing the total number, of course there is a rise in banned games.

It is also mentioned in the article:

“The tool asks game developers to complete an online form to categorise explicit content such as violence and nudity, breaking the disclosure down into “hundreds” of sub-categories, such as: “Does the game contain any bodily functions such as belching, flatulence, or vomiting when used for humorous purposes?””

Well done, and bravo for this being the only question exampled. It is a question that if the answer to it was “YES”, it would not deem the game to be refused classification. It suggests that Australia would not allow this content, when in fact, many games contain depictions of these things. These games also carry warnings for this content, such as:

The article then tangents off to the new topic of the inquiry into the Australian game development industry and how the 2012 $20 million program to support the local industry was pulled a few yeas later. Totally unrelated. Why it is included I’m not too sure. All I can think is that it’s to throw a bit more fuel on the fire.

It shits me off that this poor level of journalism is being used to talk about important topics, which may actually cause more harm then help. Clickbait and nonfactual titles should not be used. Example:

Please remember when reading these thing or watching these video, you may not be getting the whole story. If something is happening that you don’t think is right and needs changing, guess who it’s up to in order to get a change. Yep. That’s right, it’s us.

Also remember, the Australian video games classifications system is not broken. It’s working exactly as outlined. It just might not be in line with what you think is right. 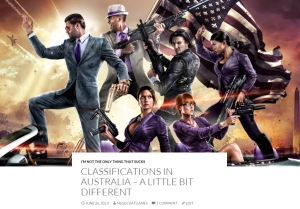