Yesterday there was a bird in my backyard. It was a dove. Not one of the cool white doves that magicians pull out of hats, but one of these things.

It was limping and didn’t seem to be able to fly. We left it alone.

This morning it was still there and I was tasked with removing it. I was told to take it to Express Wildlife Rescue. I figured this would be no issue at all. Then I looked the place up. It is just someone’s house. I had already committed into taking it there and the woman who runs it was told I would be coming. This meant I couldn’t pretend to have taken it there, while actually dumping it elsewhere.

The only thing I could think was “Please don’t let this person be a fucking weirdo.”

I got the cat carrier and went to put the bird in it for easy transportation. It sat there looking at me as I stood over it with a towel. It’s beady little black eyes pierced deep into my soul. Man, this thing was probably disease ridden. I didn’t want to touch it.

I managed to get it inside the carrier without actually touching the creature. It was rather easy. It kinda hobbled in. I got in the car and set my GPS to the address of the Wildlife rescue. It was in Wanneroo, an area i’m quite familiar with, considering I grew up there. As the GPS guided me down some back streets I started to feel lost.

“I’ve NEVER been down this road before!” I exclaimed to myself. A bit down the same road was a park. I instantly knew where I was. Turns out I used to live on this road. How fucking stupid am I. That’s not a question but more of a statement, so don’t answer that.

I turned down a few more roads and made it to the Wildlife Rescue house. I got out of the car. The place smelled pretty bad. No worse than what I imagine Guinea Pig owners put up with, but a smell I wasn’t used to. I took the bird up to the front door. There was a small cat carrier with a note that read:

I put bird cage and decided it was a bad idea to hang around as this person won’t long. I got in the car and drove away.

My brother works nearby, so I figured I’d drop in and see if he was there. I drove up and around the now familiar area to his place of work. His car wasn’t out the front so I pulled into a parking spot nearby to send him a message. As I sat there typing, I caught the image of a shaved head walking past.

It was Nathan Kelly. Long story short, he is a guy you don’t want to know. He is annoying and never shuts the fuck up. He was a regular customer at the Game store I used to work at, so I knew him. Unfortunately.

He walked right past the car and into Chicken Treat. I gave up on the message I was writing and drove the hell out of there. 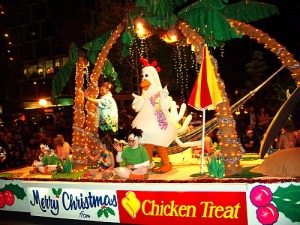 I decided to take the scenic route home. Funnily enough the road was actually called Scenic Drive. Another road I used to live on. As I drove along the lake past the bushland I remembered something I saw on Reddit and thought it might be a good idea to make a pit stop and ‘have a wander’ between the bushes and dried up lake.

As soon as the though entertained me enough to seriously consider stopping, I heard a loud thud.

“THUD!” it went. That’s onomatopoeia for ya.

I looked in my rear-view mirror. I had hit a bird.

*Parts of this story have been fabricated to enhance the dramatic nature.

** Okay it was the part about hitting a bird and killing it. That didn’t really happen.

Posted in I'm Not The Only Thing That Sucks, Real Life, Unrelated to the Other Content on This SiteTagged bird, bord, chicken treat, dove, Express Wildlife Rescue, nathan kelly, no games, spotted, wanneroo, weed, weirdoLeave a comment