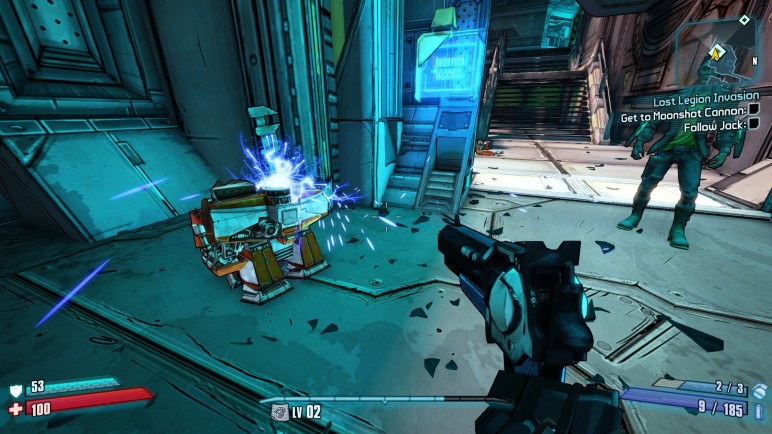 Borderlands: The Pre-Sequel is a game I have been itching for since it was first announced. I’m a fan of the previous two titles in the series and have enjoyed the game thus far.

I do have some issues with it though…

Having been out for less than a week, a few bugs are to be expected. Some of these could have been easily avoided if I didn’t suck so much. There are things that suck. And things that I suck at. Let’s review these things so far.

Oooooohhhooo-oooo, yes. There actually is a problem. A bigish kinda problem. The kind of problem that stops you from completing a mission.

Now, I’m pretty early into the game so far. I like to take things nice and slow. I like to explore and that kinda poop. After playing for an hour last night I accepted some new missions and then quit. One of these missions was ‘Nova? No problem!’ At the very start of this mission you get given a Nova shield, a special shield that gives out an electric burst once it’s depleted. I was given this shield from a special lock box and then I quit the game for the night.

When I booted it up again today, I did my usual weapon and item check. I went to the ammo vending machine and sold the loot I didn’t want. That included the required nova shield. I didn’t think anything of it. I started the mission and jumped into a moon buggy. It was mentioned that I would need the Nova shield, but I though to myself “Meh, I won’t need it. And if I do, SURELY they will give me one at the location. And if they don’t I can always buy it back from the machine, after all I only JUST sold it.” My logic was flawless.

I arrived at my destination and discovered that I did in fact require the nova shield. No biggie. I looked around. Nothing here. Oh well. I headed to the nearest vending machine to buy it back.

HUH! Oh, man. I didn’t realise that you can’t buy back loot after leaving one area and going to the next. I guess this means I’m gonna have an incomplete level 4 mission with me the WHOLE game >_<

Similar to the ‘Nova? No problem mission’ I sold a gun that is required to annoy the crap out of some friendly Kraggon. It’s a low level gun with burning properties. Luckily I found myself another gun that burnt these guys until the point of anger induced murderance. HUZZAH!

It didn’t take me long to become accustomed to the movement physics on the moon. I can happily run around and jump/float through the air with relative grace. Well as much as a Claptrap can. I do however have a big issue with the moon buggy and jumping over the firey molten lava pits. I can NEVER do it first go. I always fall to my flesh (metal) melting death. I had no trouble making the jumps in Borderlands 1 and 2!

I want my special loot!

For those of you that are aware, I’m not sure why I am telling you this as it’s information for those who aren’t, in the city of Concordia there is a special golden chest that requires special golden keys that gives you special legendary weapons. The keys are relatively easy to come by, and I have nine of them in my shift account as we speak. Well as you read. Not according to the game though. Sure I’m just at the lowly, pussy-man levels right now, but within the next week I expect to be wantin’ some o’ dat special stuff!

Don’t get me wrong. I love Claptrap as much as the next guy or gal. He just isn’t all I expected him to be. I’m a veteran Borderlandsee, but I’m not the greatest gamer. Claptrap is not the best fit for me. I went into the game fully expecting the need to conserve my O2… But Claptrap is a robot. Robots don’t breathe. That’s good I guess. It’s just he sacrifices regenerating health for this. I NEED MY HEALTH REGEN! Sure his action skill replenishes health and shield, but I’m so used to hiding behind a rock regaining precious life. And yes, I know his skill trees can help account for this… BUT I’M A LOWLY LEVEL 6 RIGHT NOW! I’ve placed all my skill points on that koala thing! His skill trees scare me!

Well, that’s some problems I’ve run into so far. Don’t get me wrong. I’m highly enjoying the game. It can be expected to make an appearance on my christmas season “Games of the year” list. I’m just having some problems is all.

2 thoughts on “How I have sucked so far in Borderlands: The Pre-Sequel”