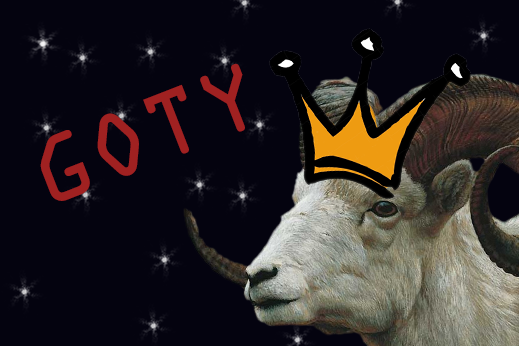 I don’t have the time to take all the games I’ve enjoyed this year, line them up and compare them to one another, weighing up the differences in styles and gameplay, then trying to justify reasons as to why one of them is my most favourite. Heck no. So Instead I’m just writing about all of my favourite games this year and why they are awesome! Some of them I have finished and others I haven’t. Most of them I sucked at. Because I am wanting to be unbiased and don’t want to rank one game better than the other, I used a random generator to determine the order of which to write about.

I’ve been playing the NBA 2K series for the last few years and NBA 2K14 is the best yet.

I started Playing the XBOX 360 version first and right away noticed it was almost identical to NBA 2K13. The menu system and gameplay modes were more or less the same. This isn’t a bad thing as it works. The controls are tighter and the game plays great. The only game mode I invest most my time in is My Career. Like any game where you create a character, you lose most of the early games. This doesn’t do much to help with your confidence especially when you suck to begin with. After a few in-game years I got drafted to my favourite team, the Indiana Pacers, and was made one of the starting five.

When the Xbox One came out I upgraded. I did away with my 360 career and started a new one on my next gen system. The graphics have had a major overhaul and the game runs great. The menu system has been simplified and honestly I found it hard to find simple things like game settings and options. The My Career mode also has a cheesy story tacked on that feels very WWE-ish. It plays differently to the 360 version and is not what I have grown accustomed to, but i’m still finding it a great game to play when I only have half an hour to play a something.

Should you play it? – If you enjoy sports games or basketball

Even though The Legend of Zelda: A Link Between Worlds has only been out for a few weeks, it has quickly become one of my favourite games for 3DS.

It is a direct sequel to A Link to the Past (a game that I am yet to complete) and immediately shows this in style and gameplay. The upgrade from 2D sprites to 3D models is obvious, but the game looks and plays just like it’s Super Nintendo predecessor. The charm of the world is enhanced by familiar melodies playing as you explore Hyrule and the new dark world, Lorule.

So far I’m only three dungeons in and have explored a big chunk of Hyrule and have found it on the lighter side of difficult. I now have access to Lorule and it gets harder quick.

For a Zelda game it has done away with the conventions you are used to and throws some new things at you. Most weapons are available to Link early in the game, but can be upgraded. The dungeons feel smaller so far, with less enemies than I’m used to, yet the puzzle design is fresh and at most times fiendishly clever.

The stereoscopic 3D is cool but I don’t have it turned on as I find it annoying. That’s in general, not just for Zelda.

Hopefully the difficulty gets harder the more I play and the dungeons get more enemies in them.

Should you play it? – Damn straight you should, unless you are one of those Nintendo hating hippies

Have I completed it? – Not Yet

Do I suck at it? – Not yet, but hopefully soon

A few months ago, I hadn’t even heard of The Stanley Parable. I was browsing Reddit one day and saw a link to the trailer. I was intrigued. It was the exact kind of thing I’m into. A game driven by narrative, rather than gameplay.

I bookmarked the Youtube clip because I knew I would forget about it by the time it was actually released. A few weeks later I was doing my usual bookmark cull and was reminded to try this newly released game.

I got the Demo first, which if you are going to play this game is 100% worth it. As a demo it doesn’t just give you a small chunk of the actual game to play, but is it’s own mini version of the full game. It shows you how your choices don’t really matter and makes you wonder if they were actually choices at all. That is exactly what The Stanley Parable is about.

Like GlaDOS from portal, The Narrator is talking through the whole game, explaining exactly what it is you are doing at any given time. Soon, if not straight away, you have the ability to defy the narrator. But that’s okay because he adapts to what you are doing, or even not doing. When faced with a choice such as taking a blue or red door, the narrator may say something along the lines of “Stanley went through the red door.” But you could go through the blue door if you really wanted to. So you chose not to follow the narrator. But at the same time the game designer may have wanted you to do that, making your choice not really a choice.

There are many endings in the game and every time, no matter what happens to Stanley, you start again. But it’s never from the beginning. But it is from the start… You can make a whole set of new choices. Or  you can make the same choices as before and new things might happen. It’s the kind of game where it helps if you remember what you have done before, but even if you repeat yourself you can end up somewhere else.

Should you play it? – That’s your choice. Or is it?

Have I completed it? – Yes?

Naughty Dog has become one of my favourite developers. I love the Uncharted series. They are my favourite games from the last generation. We can refer to the PS3 and Xbox 360 as last gen now right?

When The Last of Us was announced I was impressed. I knew right away that the production quality was going to be amazing and that the gameplay likely to be just as great. Boy was I wrong. My expectations where blow out of the water. In a good way. I have not played a game that has had as good a story. The gameplay was tight. The feels. Man those feels…

I hate survival horror and games with zombies. I am really really bad at them. I don’t like to die in games. The Last of Us worried me that it would be a game where I would die a lot, being killed by zombie like creatures. But that’s not the kind of game it is. Like uncharted there is a huge focus on exploring your surroundings. Unlike uncharted you are encouraged to employ stealth. Another game that does this is Metal Gear. I love Metal Gear. I suck at stealth. I had to learn to play stealthily. If I didn’t I would die. And I did. A few times. Less than I expected though.

Out of all the games I’ve played this year it is the one I want to replay the most.

Should you play it? – Yes. Just yes

Have I completed it? – Yes

Do I suck at it? – A bit. And I played on the easiest mode

Hot damn. The Legend of Zelda: The Wind Waker HD. I think it was Edgar Wright and Simon Pegg who coined the term ‘Fried Gold’. That is This game. Fried Gold. Nothing better.

Wind Waker in HD is amazing. It has had a graphical overhaul and the fiddley bits have all been fixed. The Gamepad adds and extra level of control that makes it the definitive Zelda experience. The moment the title theme begins to play I feel all tingly inside.

For a game that came out about a decade ago it feels weird saying that it’s the best Wii U game I have played, but then I remember it’s one of the best games I’ve ever played. Like any good game I guess I wish it was longer, but there are still hours of fun to have after the story has been completed. It is my goal to one day 100% this game. I’m close.

One of the additions to the HD remake is Hero Mode. In Hero Mode you take double damage and can only regenerate health from potions. It is my dream to finish the game on hero mode. It would be one of my ultimate achievements.

The Legend of Zelda: The Wind Waker HD is Fried Gold.

Should you play it? – Chances are, you don’t have a Wii U. Buy a fucking Wii U and get this game

(this video was not made with The Legend of Zelda: The Wind Waker HD)