The endless day… finally over. That sunlight just wouldn’t end. It shone throughout the night. How was this possible? Just because it was the solstice doesn’t mean 24 hours of brightness. This town is strange. Today was Saturday. Was this going to be another day that I couldn’t get onto my Mayoring duties? Surely if a public office is closed on the non-public holiday that was the solstice, they would be closed on the weekend…

I made my way to Town Hall. There was no note on the door. It was a good start. I pushed on it gently and it swung open. I walked in and saw that puppy working on something in the back corner. Was it Woofy? No that would be a stupid name. Why couldn’t I remember her name. I had no more time to think as she spotted me almost straight away. With that ever gleeful look that only a puppy has, she offered me a welcome in the nature of how good the day was.

Alright time to get to work. First things first… Was it Coco? Maybe. Anyway Coco said that before I could get to work I would need a Town Planning Permit. Easy! Lets sign some papers. Coco made it known to me that it wasn’t as easy as that. There were two prerequisites needed in order to get this permit.

100 percent! Get real! Surely that is a near impossible task… Well I guess with no one running against me it should be easier. And the towns folk seem rather simple. Maybe it won’t be as hard as I thought. Currently I sat at 31%

I was in my office as Mayor STILL unable to do my duties. There were a few things I was able to do though. Coco said I should consider changing the town flag. I thought to myself what a great idea that was. To remind the fair citizens of Meowland I made a representation of the heavy fist with which I rule.

Next was the town tune. Coco said that it is a reflection of Meowland itself. Something deep inside if me swelled, as if this was something I had done before… Something generations ago, something to do with my ancestors. I did some research online and discovered I did in fact have a Great Grandfather who was a prevalent member of his home town koRnatia. He was well known for composing his hometown’s tune. After some more digging I discovered that the town of koRnatia is no longer inhabited and has become a ghost town. I decided to use the tune my Great Grandfather created to ring over the airwaves of this fair town.

Having done all I can as Mayor I went to the shops. First I visited the tailors Mable & Able’s. If you ask me they look more like Sonic the Hedgehog. I put the town’s flag design on a shirt in store for the residents to purchase and wear. The more they see this reminder the better.

I headed over to Nooklings Junction. It still makes me sad to see such a young raccoon be put to work. Maybe that’s something I can change with my position of power. There wasn’t much new. I bought some camouflage print paper. I figured it would be handy for when I start recruiting for the armed services. I also purchased another fortune cookie. It was damn tasty. The note inside read:

Once again it was just gibberish to me. I approached the Nookling and asked what it meant. He presented me with a new hat. I find it rather fashionable.

On my way back to my tent I noticed a new house. Maybe they got a permit to build before I was made Mayor. I knocked on the front door but there was no answer. I went inside. To my surprise and fanboy giddiness, standing before me was none other than Princess Leia herself. I introduced myself and told her it was an honor to have her in our fair town. Honestly I meant it was an honor for her to live in the same town as me. 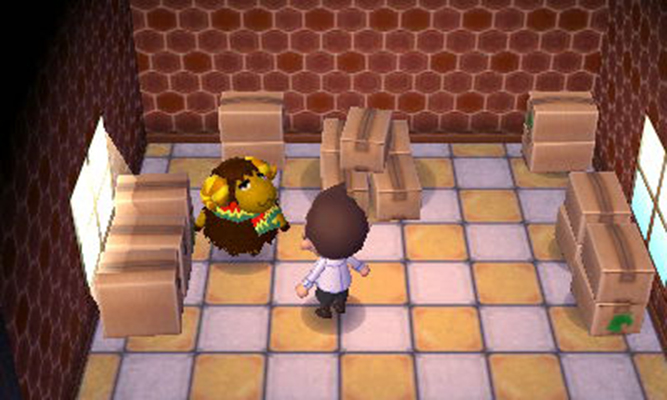 I went on my way. As I passed the Elephants house I was admiring the lush trees. All of a sudden I found myself stuck in the ground. I had no idea what the hell was going on. The elephant approached me and started to laugh. It explained that I had fallen into it’s trap. Angrily I demanded why would this trap be here. It turned out it was a home defense mechanism to stop intruders. I dug my way out and continued on cautiously.

I started to notice soft dirt on the ground everywhere. I took out my trusty shovel and dug up the soft earth. I had uncovered a fossil! Digging around some more I discovered two more fossils. I took them to Hoots, the curator at the local museum. Hoots was a bit of a weird old bird but seemed to know what he was talking about. He asked if I would be interested in donating the fossils to the museum. I obliged and went to admire what I had found. There was the back half of a Sabre Tooth Tiger, a Pachysaurus tail and some fossilized coprolite. It turns out that coprolite is poop. I found ancient shit. 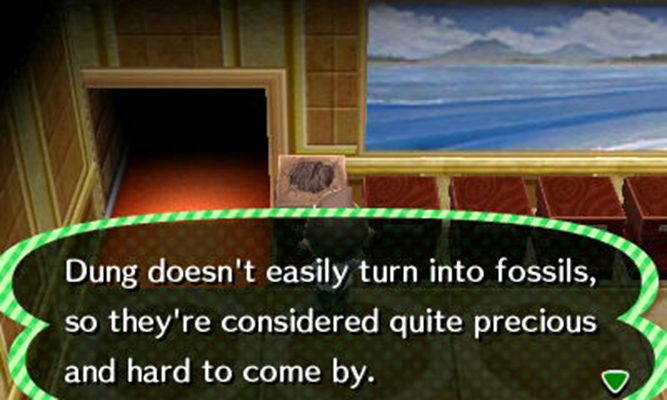 I figured I should check out the magic tree I had planted upon my arrival to this town and see if it had grown more like yesterday. It hadn’t. There was however a tent set up nearby.

I went in and was greeted by a small fox. He told me that he was selling fine art. I looked at what was on show and was struck by a painting in the back corner. I knew then and there that I must have it! It was over $3000 and I only had about $5000. I still need to put that $10000 deposit on my house so I can get to my Mayor work. Screw it. I’m not conforming to this. I’m mayor damn it. I can do what I want. I’m no slave to Nook. I shelled over the cash. I’ll spend my money on whatever I want. 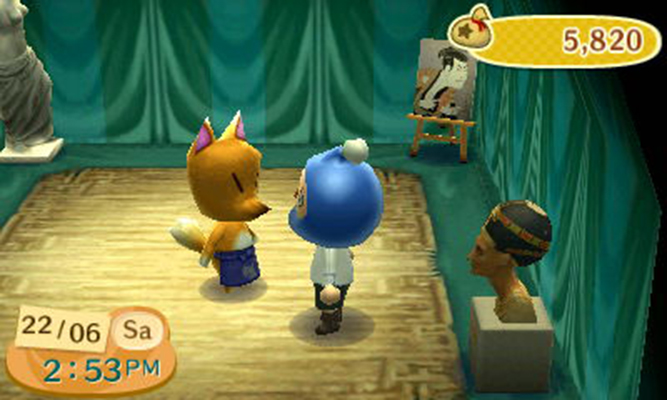